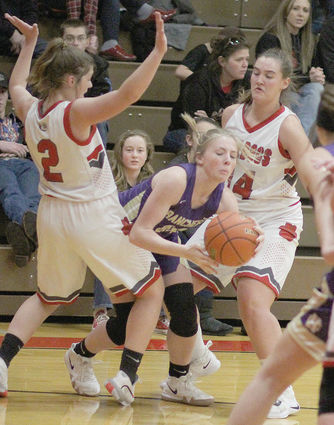 The Lady Bulldogs were back on their home court Thursday night when the Lady Ranchers of Harding County came to town. Led by Cana McInerney, the Bulldogs were on fire the first half sinking five shots from beyond the arc, and taking the nine- point advantage, 28-19, into the break.

The halftime entertainment consisted of the Sundance High School pep band as well as the Lady Big Ballers, who were showing off their skills. The second half of play saw the offense slow down as the defense picked up.

The fourth quarter was a tight one on both sides of the court. Emily Comes of Harding County was the first to score but the Bulldogs would then hold the Ranchers from putting any more points on the board until the final two minutes of play.

The Ranchers picked up their intensity on defense and sent the Bulldogs to the line in hopes of regaining control down the stretch. With a few timely free throws by Sundance, and the Ranchers unable to capitalize on some close shots, the Bulldogs were able to pull out the 41-37 victory at the buzzer.

On Saturday, the Lady Bulldogs traveled to Hill City to take on the Rangers. It was a slow start for the Bulldogs as they scored just 12 points in the first half of play while the Rangers took a dominating 20-point lead. With the double-digit deficit, the Bulldogs tried their best, but it was to no avail as the Rangers walked away with the 53-31 victory.

The Hofland twins led the Bulldogs in scoring and rebounding as Bailey put up 12 points and Brook pulled down 6 rebounds.

The Lady Bulldogs move to a 4-7 record overall and will start conference play this week travelling to Wright on Thursday and hosting the Big Horn Rams on Saturday with the JV games tipping off at noon. 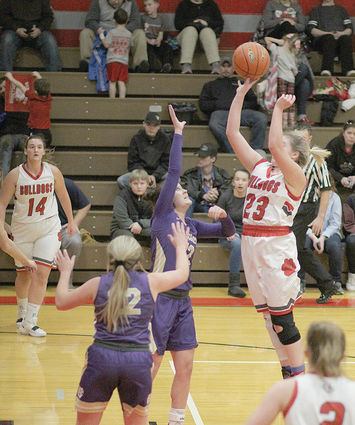