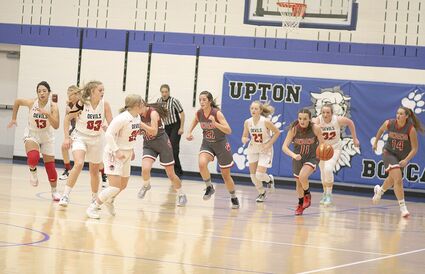 The Sundance Lady Bulldogs hustle the ball up the court against Hulett during the Upton Invite last weekend.

The Sundance Lady Bulldogs opened their basketball season under new leadership as head coach Jim O'Connor stepped back into the coaching realm. After their third-place finish in the state tournament last year, the #5 ranked Lady Bulldogs hope to make another run this season.

The Lady Bulldogs took their opening game with a 37-23 victory over the Panthers. Senior Bailey Hofland led the Bulldogs in scoring with 15 points and pulling down five rebounds while fellow senior Cana McInerney was close behind, scoring 11 throughout the game and adding five rebounds and eight steals for the Bulldogs.

For the second game of the Invitational the Lady Bulldogs faced county rival, Hulett Red Devils. The Lady Bulldogs jumped out to a quick 11-4 lead as they pushed the ball down the floor and were able to find the open girl at the other end.

Shortly into the second quarter, a timeout was called by the Lady Red Devils in hopes of slowing the pace. Although the quick baskets slowed down throughout the second quarter, the Lady Bulldogs were still able to put points on the board with free throws going four for eight from the line in the quarter and taking a 20-10 lead into the break.

The second half was a physical battle for position between the bigs down low.

"It was intense," senior Bulldog Bailey Hofland commented as Kaydence Westover and Cassie Vitto fought for position and added points to the board for the Lady Devils. The Lady Bulldogs responded with junior Zoe Skeens hitting two times from behind the three-point arc sending them into the final quarter of play with a 33-21 lead over the Lady Devils.

Shortly into the final quarter of play, Westover and Vitto each picked up their fifth fouls for the Lady Devils and found their way to the bench. While the Devil offense was not stopped, it was slowed down and the Lady Bulldogs went on to take the 42-30 victory.

Saturday brought the Lady Bulldogs back to Upton to face Riverside and Upton in their final games of the invitational. It seemed as though Bulldog Cana McInerney was having a perfect game when it came to scoring against Riverside.

She went four for four from behind the three-point arc and three for three from the free throw line, leading the Bulldog scorers with 17 points for the game, helping the team achieve a 31-14 victory over Riverside Rebels.

The final game of the Upton Invitational pitted the Lady Bulldogs against the home team, the Upton Lady Bobcats. A historically quick team, this year proved no different.

The Sundance Lady Bulldogs came out of the Upton Invitational with a 3-1 record.

"After our first games out, we see we have a lot to work on," senior Bailey Hofland commented, "but we will continue to improve."

The Lady Bulldogs will head to South Dakota to compete in the Stateline Shootout in Lead on Friday and Saturday.

The Sundance Bulldogs opened their 2021-2022 basketball season at the Upton Invitational over the weekend going up against Arvada-Clearmont, Hulett, Riverside and Upton. Finishing third in state last year the Bulldogs are looking to build off of that successful season.

With only a couple returning starters, the opening games were just what the Bulldogs needed to get their feet wet with their new varsity lineup. In a 52-16 victory over the Arvada-Clearmont Panthers, all of the players saw some time on the floor.

Keaton Mills led the way in scoring for the Bulldogs putting up 13 points for the night, followed by teammate Parker Skeens, who added seven.

Game two matched the Bulldogs against the Hulett Devils. Jumping out to a quick 19-8 lead, the Bulldogs were paced by senior Gunner McLaughlin, who scored 11 points in the first eight minutes of play.

Teammate Keaton Mills mirrored McLaughlin's scoring in the second quarter as he added 11 points to help bring the Bulldogs to a 34-12 lead going into the halftime break. The Bulldogs continued to dominate the game throughout the second half as all the players again found their way onto the floor in the 62-31 victory over the Hulett Devils.

The second day of the Upton Invitational put the Bulldogs against Riverside and Upton. The Bulldogs had a slow start in their opening game against Riverside scoring just 18 points in the first half of play. The Rebels didn't fare much better as they were only able to put up 11 before the halftime break.

Coming back for the second half of play, the Bulldogs found their groove and outscored the Rebels 14-7 in the third quarter and went on to take a 45-35 overall victory. Keaton Mills led the scoring on the Bulldogs side shooting 50% from the free throw line, going six for twelve, and scoring 25 points overall throughout the game.

The final matchup for the Upton Invitational pitted the Bulldogs against the Upton Bobcats. The Bobcats jumped out to a quick lead behind the scoring of Dawson Smith who put up 17 of the Bobcats 20 points in the first half.

It seemed the Bulldogs did not have an answer for Smith going into the halftime break down 18-37. Playing catch-up throughout the second half, the Bulldogs made a few runs in hopes of closing the gap between themselves and the Bobcats but, unfortunately, they were unable to overcome their halftime deficit. Three Bulldogs found their way into double digit scoring with Mills leading the way scoring 13 points followed by McLaughlin who put in 12 and Levi Rudloff who added 10. Unfortunately, that was not enough and the Bulldogs fell to the Bobcats 39-74.

The Bulldogs start the season off with a 3-1 record and will travel to South Dakota on Friday and Saturday to participate in the Stateline Shootout. 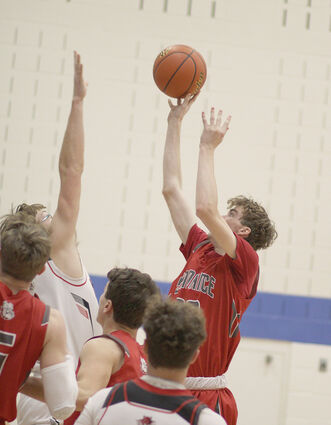