Teddie Lou Eberspecher Ellis was born on July 19, 1936, to Rachel Elizabeth Duncan and Clarence Theodore Eberspecher in the home of her maternal aunt and uncle in Glenrock, Wyoming. She was raised in various locations north of Douglas including a homestead owned by her parents.

She started school in Glenrock when she was in first grade but soon moved to Harrison, Nebraska where her father leased the Davis Place. The family moved into a house in town when World War II started, and her father went to work on the Canada to Alaska Highway.

Being raised in the country gave Teddie Lou that sense of happiness being at home and making her own entertainment. She enjoyed her many projects including rock work, quilting, sewing and flower gardening. She did not enjoy going to town or shopping but let her do something outside and she was incredibly happy.

The family would move several more times following work and raising cattle. Later moving to Lance Creek, Teddie Lou attended high school where the students were then bused to Manville with Teddie Lou graduating in 1955.

The couple were married in Hot Springs, South Dakota on October 1, 1955. They moved to North Dakota and then Montana where they had their first child, Rexanne.

They moved to Newcastle, Wyoming and then to Santa Rosa, CA for a few years and then back to Lusk, Wyoming where their son Trent was born. They then moved back to Newcastle and raised their family until retirement and moved to the quiet community of Moorcroft. They spent many wonderful years in Newcastle and Moorcroft enjoying family and friends.

Teddie Lou passed away from a lengthy illness in Fulshear, Texas on June 28, 2021. She had been living with her daughter and son-in-law for the last six-plus years. She will be buried next to her husband of 59 years in Moorcroft. 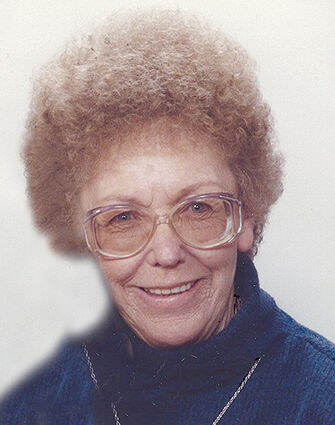 A graveside committal service was held on Wednesday, July 7, 2021, at the Moorcroft Cemetery in Moorcroft, Wyoming. A memorial service was in the old Moorcroft School cafeteria with a potluck and fellowship following. In lieu of flowers, donations to Moorcroft Senior Center would be appreciated.