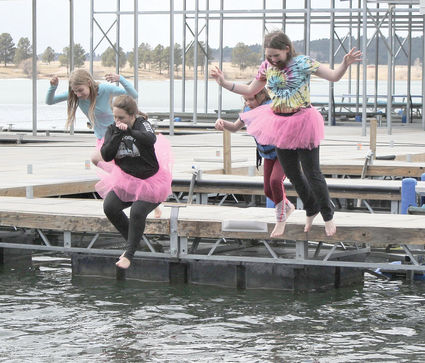 Saturday morning saw the beginnings of a blustery cold and cloudy day as 38 daring souls gathered at the Keyhole Marina for the annual Jackalope Jump.

“It was the biggest one we’ve had so far,” reports Special Olympics Coordinator and Coach Kassie Clements. This annual event raises funds for the Crook County Special Olympics.

The 2020 jump was cancelled due to the Covid 19 virus, but this year saw the event come back strong, unofficially raising $8200.

“We raised more than Gillette and Sheridan so far,” Clements later said. “[We are] so blessed to be a part of such an amazing district.”

Many of the participants are friends and family who give their support to the athletes of the Special Olympics throughout the year.

As the participants lined up along the dock and laid aside their coverings, the bitter wind coming from the icy waters of Keyhole Reservoir had many wrapping their arms around themselves. Then, before they could reconsider, groups came together and boldly took that step into the waves.

Many came up breathless with the cold, clambering from the water and into the waiting arms of loved ones with blankets, warm socks and shoes while a couple had to have assistance to escape the frigid wharf.

An individual told Clements after they recovered from the jump, “It was the most awesome but most dumb thing I’ve ever done! The water needs to be warmer next year so that I can’t say I did something dumb again”

Clements hopes to have soup and hot chocolate for participants to enjoy before taking the plunge next year and, “hopefully, it will be less windy and a little warmer, but I was thankful that it wasn’t below 20 degrees”.