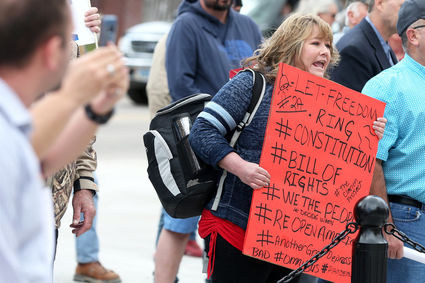 The state will lift its restrictions on businesses and gatherings when it appears prudent to do so, Gov. Mark Gordon told a group of protesters at the state Capitol on Monday.

Gordon’s talk with the “Rally for the Choice to Work” protesters came as the number of confirmed coronavirus cases in Wyoming grew to 317 with the discovery of four new cases in two counties.

The protesters had gathered for a rally to encourage the state to lift the restrictions put into place in March to slow the spread of coronavirus.

Rally participants, who came to Cheyenne from across the state, said Gordon’s decision to leave the restrictions in place until at least April 30 will harm the economy.

“Everyone’s income supports their family, and there’s a way to do this without shutting the whole economy down,” said Ben Zeller, a small business owner from Cody.

“Today, you’re hearing people who want the choice to go back to work and get this economy moving in the right direction,” said M. Lee Hasenauer, a former Laramie County commissioner.

But Gordon declined to set an exact date for the restrictions to end, saying it would be best to make sure the coronavirus no longer poses a safety threat before taking such action.

“When we go back to work, we want to make sure we can continue to work,” he said.

Supporters of removing the restricts also gathered in Jackson’s Town Square on Monday to discuss Teton County’s “stay-at-home” order with passers by.

Bob Culver, a member of the Jackson Hole Tea Party, which organized the gathering, said the event was not a protest.

“I didn’t organize a protest or a demonstration,” he said. “I just wanted people to come out and feel free to talk.”

About 15 people gathered for the event.

Wyoming officials have resisted issuing a statewide “stay-at-home” order, instead approving orders closing schools and businesses likely to attract more than 10 people, closing businesses that provide personal services such as hair salons and tattoo parlors and prohibiting gatherings of 10 or more people.

The state was the last in the nation to record a death attributed to the coronavirus and the last to see confirmed cases top 300.

As of Monday, Wyoming’s coronavirus case count stood at 317, with four new cases being detected in two counties on Monday.

The Wyoming Department of Health, in its daily coronavirus update, also said the number of people to recover from the coronavirus increased by four to bring the total to 237.

As of Monday afternoon, Laramie County had 73 cases; Teton County had 62; Fremont County had 51; Natrona County had 38; Campbell County had 13; Sheridan County had 12; Johnson County had 11; Sweetwater had 10; Converse had nine; Albany and Uinta had six; Lincoln and Washakie had five; Carbon and Crook had four, and Goshen had three. Big Horn, Hot Springs, Niobrara, Park and Sublette all had one case.

Platte and Weston counties remained free of any confirmed cases.

Internet surge: Internet service providers in Wyoming are reporting a major increase in demand for internet access. Providers say the surge in demand is the result of more people working from and even attending classes online at home. “We’re seeing a lot of activity right now,” said Brian Worthen, CEO and an owner of Visionary Broadband in Gillette. “It’s an unprecedented situation, but we’re all encountering it, not just one or two providers.” Visionary provides internet service in 94 Wyoming communities.

Paycheck Program empty: A federal program designed to let business owners keep their workers employed has provided more than $837 million to 7,618 Wyoming companies. However, the funding for the Paycheck Protection Program has run dry, leaving some companies approved for the assistance unable to obtain the money they’ve been promised. “We’re very hopeful that Congress will appropriate additional funding for those small businesses that we’ve also heard from who were not able to receive loans yet,” said Amy Lea, director of the Small Business Administration’s Wyoming District.

Gym owner charged: A Pinedale gym owner has pleaded not guilty to a charge of violating the state’s public health orders. Jennifer R. Ramsey is accused of allowing a member of her Iron Bar Gym to work out there despite the state order specifically closing fitness clubs and gyms. Ramsey is charged with violating a public health law, a misdemeanor punishable by a fine of not more than $100, up to six months in jail or both.

Shed hunt: The state Game and Fish Department has denied the request of Teton County officials to postpone the opening of shed antler hunting by one month. The order had been seen as one way to discourage people from outside the state from visiting Jackson on May 1 to hunt for the antlers. Teton County Commissioner Luther Propst led the effort to ask the Game and Fish Department for a one-month delay, but the department has announced the hunt will begin May 1.

Sanitizer: An Evanston company has made and donated 11,000 bottles of hand sanitizer to 35 public agencies in Evanston and Bridger Valley. BPI Labs and its employees produced the sanitizer and the company is now working to produce body wash for distribution in the area.

Tourism pitch: The Park County Travel Council is preparing a slightly different approach to tourism promotion in a post-coronavirus summer. The council has approved a promotional video that shows outdoor scenes of Park County and carries the message “Cody Yellowstone, when you’re ready, we’ll be ready.” “It’s a warm and fuzzy message,” said Claudia Wade, the council’s executive director.