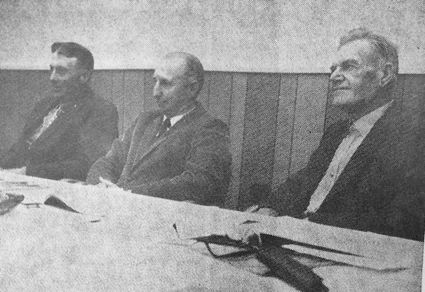 Deputy Sheriff W.D. Roadifer has sold his ranch in Grand Canyon to his son Raymond, who recently sold his ranch on Beaver creek in Weston County to Walter Williams of Raven Creek. The Grand Canyon ranch is a valuable mountain tract of considerable good timber, and the quality of the tilled land is as good as lie out of doors.

The Kara mountain country must be a favored vegetable section this year, D.G. McMoran having sent in a sample of three potatoes, the only possible fault with which could be the size of the fruits, three of them snugly filling a basket and weighing seven pounds.

Reports from Washington on the president’s condition are not encouraging as to his ability to soon take up the duties of his office, and it is given out that the cabinet is planning to take on the president’s responsibilities to the fullest extent possible and for an indefinite time.

At the annual meeting of the Crook County Farm Bureau all officers were re-elected to serve another year. They are Nathan Lincoln, who is president of the group; W. Aubrey Long of Alva, who serves as vice-president, and Jack Myers of Sundance, who is secretary-treasurer.

Top bull of the second-semi-annual sale of the Northeastern Wyoming Hereford association went at $1050 to Patsye Brown of Oshoto. The animal was Lot 17 from the A.H. Hewes and son ranch near Sundance.

The decision to set up one school district for Crook County was reached here Oct. 4 during a meeting of the Crook County School Reorganization Committee. At the present time, the county has eight school districts. Committee secretary Jay R. Durfee, Sundance, said the board would like to have the single district organized by July 1970 but that this date is not definite.

Stephen Geis of Aladdin has been selected to attend the National Young Leaders Conference from November1 to 6 in Washington D.C. The conference is a leadership development program for high school students who have demonstrated leadership potential and scholastic merit.