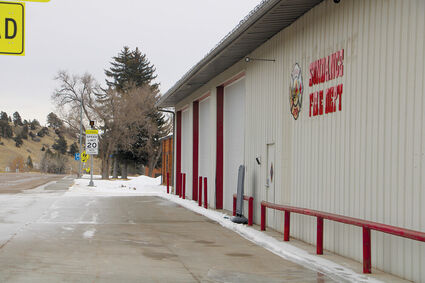 Upgrades to the Fire Hall would include a new entrance that does not emerge onto the busy highway.

After falling just shy of the final shortlist for the first round of American Rescue Plan Act (ARPA) funding that was designated for infrastructure projects, the City of Sundance will be giving it another go later this month.

At Tuesday's regular meeting, the city council passed resolutions authorizing applications for two projects from two separate pots of ARPA funding. The first would help fix a major water leak, while the second would help upgrade the fire hall.

The first application is for a total of $1,310,400 for the 3rd Street Waterline and Cleveland Street Project. The intent is to repair a major water leak through which the city estimates it is losing 50,000 gallons of water per day, and to relocate service taps located on an old, four-inch galvanized waterline.

"This is combining two projects under one," said Mayor Pro-tem Brad Marchant.

The city put in separate applications for the leak and taps during the first round of funding but, with hindsight, has decided to combine them this time.

The two are actually related, explained Public Works Director Mac Erickson, which means this is, "A good move on our part."

The city is hopeful of better success this time around. As Erickson said after the first round of funding, Sundance didn't actually score too badly, despite going up against bigger towns with dedicated staff who know how to prepare grant applications in a way that secures every point possible.

"We were reaching for the stars pretty good," he said in November, when the news was received that none of the six had been successful. On the other hand, he said, the projects mostly scored highly enough that, "You could say we're the first loser."

Since that time, Erickson and city engineers Trihydro have worked to perfect the application, which will be submitted to the Water & Sewer ARPA Grant program through the State Loans and Investments Board (SLIB).

A second resolution was passed on Tuesday on behalf of the Sundance Volunteer Fire Department. This $535,000 grant would be used to upgrade the current fire hall to increase the available storage for equipment and create space for volunteers to meet.

The building has been in use since the 1980s; during the interim, equipment has continued to increase in size, from the gear worn by firefighters to the trucks themselves. According to Fire Chief Gari Gill, the department is also sorely in need of a training room.

The renovations would also allow for a new primary exit to be added on the south side of the building, which would mean that firefighters responding to a call will no longer need to emerge onto the highway. The south is also easier to keep free of ice and snow.

According to the resolution, this grant application will be submitted to the Local Government Project ARPA Grant program through SLIB.