Ted was born in Deadwood, South Dakota and grew up in Aladdin, Wyoming, on a ranch with Mother, Flora (Wheeler) and his dad, Ben. He was the youngest of three children and was quite the "miracle baby" as his mom miscarried his twin brother one month before they realized there was another baby to be born – that child was Ted.

He was an exceptionally curious boy, intrigued with finding out how things worked. At a young age, he built his own riding contraptions and gadgets.

At the same time he was discovering, he was learning great life lessons on the ranch – to work hard even when you have no gas, to play hard because that is when your mind works the best, and to always be humble.

In 1966, Ted graduated from Sundance High School. It seemed a natural pathway to everyone that he go to college and study engineering so fittingly he took off for Lowell, Wyoming.

While at college though, he discovered he would much rather go to Flight School than finish his engineering degree. He went home, told his folks and he said they always thought they knew that day would come as he soloed for the first time long before he graduated from high school.

He financed his flight lessons in high school by selling chickens and eggs raised on their ranch! He graduated in1968 from Ag Aviation Academy at Stead Airport, Reno with his commercial pilot's license.

He arrived in Viet Nam just in time to take part in the infamous Tet Offensive. As a sergeant, one of his comrades and best friends said that Ted was the leader they could trust and never doubt his decisions and always relied on them.

"The faith and respect he had in his soldiers created in them having the faith in him to do what was right".

He was two months from finishing his tour when he was shot leading his platoon out of Cambodia back into Vietnam. It was a long recovery for Ted, seeing many return trips to Fitz Simmons hospital in Denver, Colorado.

Ted never lost sight of his dream and eventually saw clear to live it. In 1973, Ted became the first airport manager of Black Hills Airport and stayed for the next 20 years.

During that time, he founded the South Dakota Aviation Hall of Fame in 1991. He initiated fundraisers such as the famous Pork Chop on a Stick food booth at the Art Festival, fly-ins and the annual induction ceremonies. 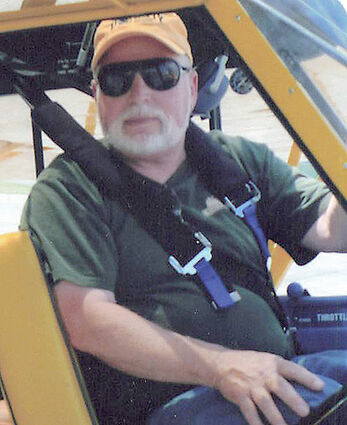 Ted will be profoundly missed by his loving grandchildren who he has tried to teach how to work hard, play hard and always be humble, Seth, Wyatt, Katelyn, Grady, Gavin, Brynn, Sean, Bradley, Riley, Olivia, Brady, Bailey and Sydney; great-grandchildren, Jocelyn, Drake, Drew and Brooks. We love you and will always miss you.

Ted was preceded in death by his folks; sister; and son, Travis in 1994.

A Celebration of Life was held Saturday, September 17, 2022. Interment with military honors was at Black Hills National Cemetery.

Condolences may be sent to the family at http://www.kinkadefunerals.com