Mildred Della (Shepherd) Tope was born on October 2, 1924 to Piney (Pollock) Shepherd and Alf Shepherd. She was the first child born at Edgerton, Wyoming.

During her childhood, she lived in numerous homes in the oil patch in southwestern Wyoming until she moved with her family to their ranch near Oshoto, Wyoming. Mildred graduated from Sundance High School in 1943, and went to college at Spearfish Normal School to become a teacher.

Mildred married Robert Tope in 1944. To this union three sons were born, Robert Jr., Larry, and Jay. They ranched in South Dakota until they purchased the Pollock ranch, on the Grey Road, north of Moorcroft, Wyoming in 1949.

They continued to ranch there until Bob's death in 2012. She then lived for several years in the Semlek home on Grey Road, next to her good friends Shawn and Vicki (Semlek) Cook.

Mildred and Vicki spent many fun hours shopping in the stores of Gillette, Wyoming. She then moved to the Aladdin, Wyoming ranch, and lived independently near her son and daughter-in-law until one year ago, when she moved to Belle Estate Assisted Living, outside of Belle Fourche. There she was very well cared for and lived out her last days with comfort and peace.

Mildred spoke often of her early years of teaching when she purchased a small trailer house, "the first one invented". She stayed in it alone during the school year, sleeping with the potatoes so they wouldn't freeze, and breaking the ice in the school house water cooler every morning.

After having her first son, Bobby, she sometimes rode horseback with her one-year-old in her lap to the neighbors so they could care for him while she rode on to the school to teach.

Mildred loved gardening, and had large gardens for many years, feeding their family year around with the food she canned. She enjoyed working outside beside Bob, doing the milking, haying and caring for chickens and calves.

Mildred was an avid reader and read thousands of books in her lifetime. In 1986, she won the Pillsbury Bake-Off contest for the region and flew to Florida for the National Competition. She had never been on an airplane before and said she would have to be blindfolded and led on like a frightened horse.

Mildred had a very sharp mind and a quick wit. She could converse about any subject, and had a fantastic memory. She will be missed by her entire family. 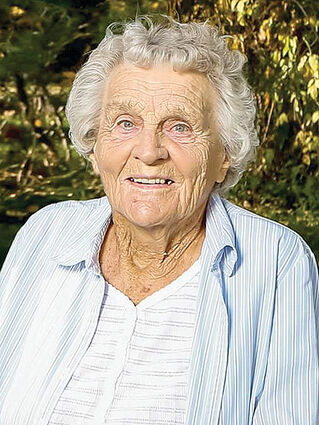 She was preceded in death by her parents; her two brothers and their wives, Mike and Edith Shepherd and Roy and Carmen Shepherd; her brother, Raymond; her husband, Bob; and sons, Larry and Bobby.