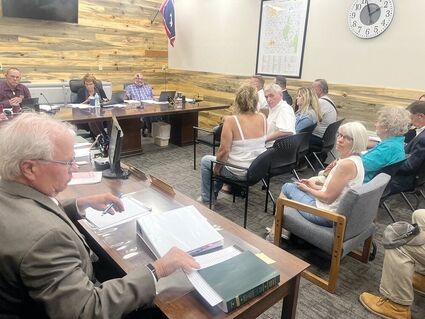 It was standing room only at the public hearing, where Commissioner Jeanne Whalen expressed her pleasure to see so many people interested in the topic of regulations for large-acre subdivisions.

Considering that it was standing room only for a public hearing on the proposed new regulations for large-acre subdivisions within Crook County, there was a surprising lack of resistance to the overall idea of imposing rules.

Though many in the audience attended just to listen, a number of people did choose to comment, whether orally or in writing. However, the objections were largely limited to procedural items and none opposed the overall idea of regulations.

"This process has been going along here for at least the last year and a half," said County Attorney Joe Baron as the hearing opened, describing the work of the county's Land Use Planning committee to put the regulations together at the behest of the Crook County Commissioners.

At the request of Pat Donahue, Western Properties, each of the three commissioners shared their thinking on the regulations during the meeting.

Commissioner Fred Devish stated that, in his opinion, regulations are needed to ensure that developers are properly providing the services needed for new subdivisions at their own cost, rather than the taxpayers'. The developers are the ones making money from the deal, he said.

"I don't want to see the rest of the citizens of the county taxed with doing roadwork and stuff," he said. "As developers, you should be the ones that pay that price...to me, that's the ethical thing to do for everyone else in the county."

Devish stressed that he is not trying to shut down any of the development and supports free enterprise, but said he thinks people need to be aware of the costs they are shoveling onto others. He also noted that the county isn't seeing much in the way of small developments under five acres, which he suspects is because regulations are already in place and the rush to develop is occurring in order to take advantage of the lack of rules on large developments.

Commissioner Jeanne Whalen used the example of her work to promote broadband coverage in Crook County to illustrate her concerns about the county being unaware of ongoing development.

Providers need hook-ups per mile to justify the cost of installing broadband, she said, and a new subdivision is an obvious place for them to begin. However, if the county doesn't know a development is happening, this information cannot be shared.

"If anyone should know what's going on in this county, it should be us," she said. She listed numerous agencies and entities who are affected by new subdivisions coming in, from the U.S. Post Office to the schools and the county's Road & Bridge Department and said the county has to know these things to make it possible to plan for the future.

Commissioner Kelly Dennis gave a concise statement that a lot of places have already restricted where development can happen, and Crook County is "well behind".

Ian Sandefer, attorney with Sandefer and Woolsey of Casper, represented two development LLCs, Yellowstone L&R Ranch and Double A Ranch. He stated during the meeting that he feels the provision within the new regulations that requires developers to upgrade a county road that provides access to a subdivision to current county standards is "problematic" and may go against previous Supreme Court decisions, and said the document is not clear as to whether the rules will be applied retroactively on currently existing developments.

"I think the ambiguity causes confusion," he said.

In a written comment, Sandefer suggested that the county has not followed all the statutory requirements for adopting a regulation and asked where to find the materials showing that the guidelines were followed.

A second written comment from the law firm, this time from attorney Kenneth Barker, pointed to "several significant legal issues".

"We are mindful that the rest of the world has discovered wonderful Crook County, Wyoming," states the letter. "We appreciate, therefore, the commission's effort to address potential land use issues."

The comment suggested that the county might want to slow down its process to allow for consideration and public input, rather than push the rules through quickly. It again questioned whether the rules would be applied retroactively.

The road improvement provision was also mentioned in this second written comment, with Barker writing that his clients find it "objectionable" that they would be asked to provide the aforementioned road improvements. He questioned its legality and also whether the county's lack of taxing authority to impose, "What is, in effect, a tax on a selective group of landowners for public road work projects."

The remaining comments were from county residents, including members of Land Use Planning and people who work with property sales and development.

Callie Hilty of Bearlodge Engineering spoke during the meeting and later submitted a written comment with a number of individual issues she had identified within the proposed regulations.

"I think there's a lot of unclear stuff in here," she said, expressing concern that she has never seen a variance granted to any regulations during her time submitting documents to Land Use Planning, which makes it important that the rules are cleared up now.

For example, she queried the wording of the requirements for easements, which currently says an access easement of 60 feet and a utility easement of 30 feet are both needed. Does this mean, she asked, that the total easement needs to be 90 feet wide, or can they overlap?

Ralph Goodson of the Land Use Planning committee responded to the comments about road improvement, saying its not unprecedented to require developers to improve roads as long as it directly benefits the residents of the subdivision. He also suggested that the county could place a moratorium on development until the regulations are passed.

Mary Yemington, also of Land Use Planning, explained that the committee's thinking was partly based on a desire to encourage development closer to highways and towns, which are more sensible locations in terms of the services needed.

Jody Bagley asked that developers be required to place fences, and also pointed out that, once developed, the taxes collected from land do not cover the cost of services needed. Steve Brazes suggested the county perform an impact study before regulations are passed, while Roni Steed asked for regulations that all splits need to go through the county first and Jeff Waliezer stated that rules are needed, but they must be reasonable.

Tracey Jundt of the County Assessor's Office pointed out that roads and services will be easier to provide with roads and services in place. She shared that 111 deeds were filed with her office in just the first two weeks of September.

On that basis, she said, let's provide regulations so we can have roads and utilities provided properly.

A written comment from Jeanne and Jackie Wyatt expressed support for regulations and also for a moratorium on development if that proves necessary to ensure the planning is implemented properly. Their comment suggested that additional regulation of well drilling and septic systems may be needed to protect water sources and asked for setbacks on property lines to be included.

"People too often come into our area for freedom from regulation but then immediately demand that roads be plowed and maintained and fires be suppressed," states their comment. "The cost of these services need to be factored into development plans."

A written comment from Jeff Waliezer urged the commissioners not to limit themselves on the input they have on subdivisions and provided a couple of suggestions for changes to the proposed rules.

The commissioners allowed public comments until noon on the day after the public hearing was held, in order to gather as much information as possible on citizen opinions. A special meeting was set for September 14 at 9 a.m. for the commission to deliberate further.