Throwing a shoe: 42 compete in state horseshoe championship in Gillette 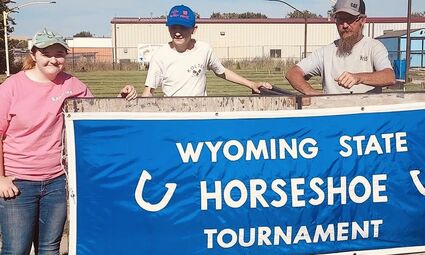 Three members of the same family placed in this year's Wyoming State Horseshoe Tournament which was held in Gillette August 27-28. Kolter, Kris and Kayleigh Huven of Moorcroft all won in the top three in their prospective divisions. Kolter Huven won 1st in the Junior Division, Kris Huven took 2nd in the Men's Class B Division and Kayleigh Huven won 3rd place in the Women's class B.

GILLETTE - The sounds of metal against metal rang out Saturday morning, with two-and-a-half pound horseshoes clanking against stakes in the dirt after traveling more than 25 feet in the air.

The tournament, put on by the Wyoming Horseshoe Pitching Association, included nine people from Gillette, but it also brought in people from all over the state, from Riverton and Green River to Shoshoni and Lovell.