Sandra Kay Madrid was born on January 19, 1964, in Wessington Springs, South Dakota, to Arthur and Dorothy Maxwell. The youngest of five and arriving many years after her older siblings, she was raised and loved by her parents, sisters and brothers like a daughter.

She lived in "the Springs" as a child and later moved to Gillette, Wyoming, with her family. Wessington Springs was always in her heart and she always looked forward to a trip to the Springs, especially if it was over July 4.

While living in Gillette, Sandy met and married Craig Hemmah. To this union they had three children, starting their family in Gillette and eventually making their home in Sundance, Wyoming.

They built and operated C&A Meats, raising their kids and working very hard to provide a life they wanted. They enjoyed many summer days cruising the Black Hills on their Harleys as this was Sandy's joy.

Sandy loved to camp as a family and Keyhole was an every-weekend adventure where their kids learned to swim like fish and ride jet skis all day. She wanted a great childhood for her kids and man did she deliver, we are blessed.

Many years after her children became adults, Sandy chose to follow her heart, which led her to travel and enjoy the rest of what the world had to offer. Sandy met Mitch Madrid and together they traveled and enjoyed countless adventures on their Harley or in their Jeep. They married on December 31, 2016, in Las Vegas, Nevada.

Sandy was a wild spirit. She never drank but if you were looking for the wild one in the crowd, you would find her.

She enjoyed life free, always taking in a view and speaking of it like "the moon was right over there." This was a funny moment we all still laugh about to this day.

She was funny. Jokes came naturally to her and if you were in her presence she was going to try and get one over on you. Her smile came from her soul and radiated out her beautiful blue eyes and her laugh is unforgettable.

The day after her 57th birthday, she was diagnosed with non-small cell lung cancer. Sandy underwent chemotherapy and radiation along with immunotherapy.

She wanted to give it all she had, and she did by fighting so hard. Sandy left this world to be with those she missed so much on August 3, 2022, at Hope West Hospice in Grand Junction, Colorado, with her loving husband Mitch by her side. 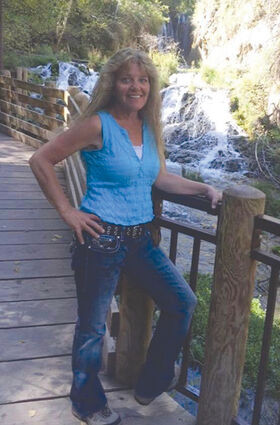 She is now watching over all her eight grandchildren and laughing when they give her kiddos grief. She will be missed very much by many nieces and nephews who often spoke of her as their favorite.

She is preceded in death by her parents, Arthur and Dorothy Maxwell; her brother and sister-in-law, Monty and Donna Maxwell; sister, Marvelyn Salmon; sister, Sharon Pearson and many aunts and uncles. We know the Heavenly reunion was great.

Sandy didn't like the heat and would prefer to have her celebration of life in the spring. We will celebrate Sandy on Saturday, June 3, 2023, in Sundance with the location and time given at a later date.