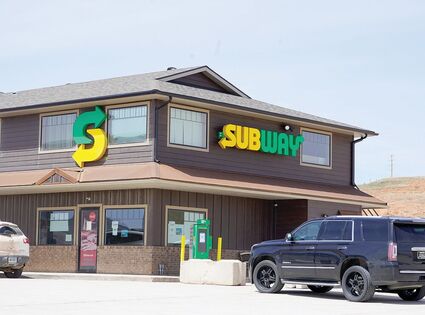 The new Subway location is attached to the Sundance Travel Center.

A familiar brand is returning to Sundance under the management of Steve and Penni Case. Fans of sandwiches, salads and cookies will soon be able to stop in for a meal at Subway's newest outlet in the Sundance Travel Center.

Offering all the familiar items on the Subway menu, the new branch will feature a drive-through option complete with touch screen ordering option.

"It talks you right through it – you can order a sandwich in a matter of seconds," Steve says.

Customers in a hurry will also be able to order their food online and pay in advance.

"We're highly encouraging people to do that," he says, touting the benefits in particular for someone on their lunch hour during work or school.

"All you have to do is drive right up, grab it and go, so your away time is basically zero."

This will also be useful for tourists visiting the area, he adds, who can make a quick stop in town to grab food before heading to their destination.

Online ordering will be possible through the subway.com website and also through the Subway app.

The couple made the decision to open the fast food outlet after musing on local options for healthy eating.

"My wife and business partner is the clinic manager over there in Sundance. She and I were talking about the patients that she takes care of and some healthy eating alternatives for them," Steve says.

"Sundance has very good, but very limited, eating options and [we thought] maybe [it would be good] if there was somewhere they could get things that are a little bit healthier a little bit faster."

Steve pointed out during that conversation how much the couple themselves enjoy Subway food and suggested it might be the answer.

"We both kind of laughed about it and then I made a couple of phone calls – and here we are," he says.

The reaction so far from community members has been "every bit positive energy", he says. Since the signs went up on the building, potential customers have been testing the front door.

The eatery has been under development now for almost a couple of years, Steve says. It's located in a pre-existing part of the Sundance Travel Center building that has now been gutted and remodeled to become a Subway.

"Sundance is such a wonderful small community," says Steve. As the city continues to grow and progress, he says the couple is thrilled to be a part of things, and, "Our longer term goal is to relocate over there."

Thanks to the pandemic, the couple found themselves tackling plenty of unexpected issues, from business team woes to architectural problems. But the delays have done little to dampen their enthusiasm.

"It's been quite a challenge. COVID-19, like to the rest of the world, certainly wasn't a friend to us either," he says.

"It's been delays, delays, delays on every little aspect of the process and that has put us where we are now, but we're very optimistic and very happy to be joining the Sundance community."

The new Subway will open within the next couple of weeks, pending the delivery of two final pieces of equipment.

The branch will be open seven days a week from 7 a.m. to 9 p.m. These hours may be altered in the future according to customer demand.

A ribbon cutting and promotional event for Subway will be announced in the near future.