Bertha Mae (Kokesh) Feeley, beloved mother, Grandma, aunt and friend, was called home by our Lord Tuesday evening, April 12, 2022. She was just beginning her second century of life when He took her hand and, with an easy smile, walked side by side with her up Heaven's path to once again hug and kiss those loved ones who had gone before her - the family and friends who have been waiting so patiently to welcome her with open arms. She had spent the past three years at Garden Hills Assisted Living facility in Spearfish, South Dakota and was resting up after supper when Heaven's doors opened.

Bertha was born August 5, 1921, in Sundance, Wyoming, to parents Hugh and Louise (Moller) Kokesh. Their ranch on Red Canyon south of town and east of the Moskee Road would be home for her first 18 years. There, she spent time with family and friends, playing and working and going to the one room school across from the ranch house. She went to high school in Spearfish and later to the University of Wyoming where she met her husband of 50 years, a Cody native, Dominic Feeley. They were blessed with daughter Janyce while Dom was fighting in Europe and Bertha living in Cody. He spent his career with the Soil Conservation Service, so the family moved from time to time. But always remaining in Wyoming. When working, she was a bookkeeper, proficient in shorthand, typing and math. When son Ed was born in 1952, Bertha stayed home to raise a growing family. She returned to work after daughter Terri left for college. When Bertha's granddaughter Emily was born, Bertha and Dom shared life with Terri's family, helping to raise the grandkids. Bertha was still helping when she moved to Garden Hills.

Bertha took pride in her summer gardens, from Sundance to Wheatland to Cody to Greybull to ... Kemmerer? Okay maybe not Kemmerer! Although she tried valiantly after first moving there, the elevation (7100 ft. and up) and short growing season (31 frost free days) proved difficult foes. But then the family moved to Sheridan and yes – her gardens flourished once again!! Church was important to Bertha through most of her life, until age and hearing slowed her down. But the love she had for the Lord never wavered. She just worshiped in the best ways she could – through love of family and friends, and helping as best she could with anything asked of her. 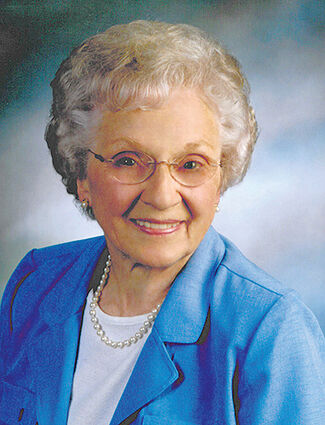 Bertha is survived by sister, Julia (England) of California; son, Ed (Nancy) of Arizona and their sons, Josh (Kemmerer) and Jake (Arizona) and their families; daughter, Terri of Spearfish and her son Nick, daughter Natalie and daughter Emily and her daughter Rose; son, Joe of Aladdin and his love for family, friends and life; and numerous nieces and nephews and all their wonderful families. Bertha is loved by many and they will miss her so.

Bertha was preceded in death by her husband, Dom and their daughter, Janyce; her parents, Hugh and Louise; her brothers, James, Charles, Arthur, Joe and Freddy; and her sisters, Creta (Minor), Winona (Lanning) and Margaret (Ellsbury).

Services were held Wednesday, April 20, 2022, at St. Joseph Catholic Church in Spearfish. Burial will be in Cody, Wyoming, in Riverside Cemetery at a later date.