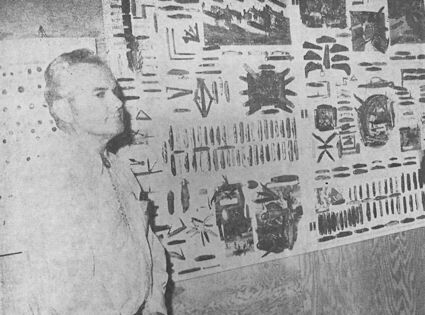 50 Years Ago, April 13, 1972: Bob Cronn, Sundance, who has been a collector of various objects for many years, showed two of his fairly new collections during the recent Hobby Day event in Sundance. Above, Bob stands in front of his marble and jackknife collections, both of which he started in February 1970. Many of the items in the collections came from second hand and antique stores. Bob said various friends and neighbors had given him help with his knife collection.

Verne Taylor and Mr. Deckleman were down from Alva, Saturday. Mr. Deckleman says they received a much heavier snow in his locality last week, there being about ten inches, and it was full of moisture.

After seeing so many of our citizens contract the flu, Dr. Clarenbach decided it must be a good thing and he tied into it himself this week. The doctor has not been able to answer calls for several days past.

Clifford Buckley moved out to the Henderson ranch on the Horton road this week and will go back to farming this summer.

A large flock of cranes circled over...