Edith LaVerne (Wham) Shepherd passed away early Sunday, February 27, 2022, at her home. Born July 25, 1931, to James D and Marguerite (Peg West) Wham, Edith was a miracle baby considering the fact that during the pregnancy a uterine tumor was removed prior to her full-term birth.

She attended school in a one-room country school and then lived at a boarding house in Sundance during high school so she could attend classes. Often she was pulled from her classes to "substitute teach" any of the lower grades.

Once a teacher, always a teacher. She taught at a one-room country school before she was 20 and little did she know that she would make a difference in a young life 60+ years later when a family asked her to watch their kids after school. Homework had to be done before any games and their grades made a definite improvement.

She belonged to the Carlile Livewires, a homemaker's club. Their service projects included serving meals for school banquets and reaching out to the community to help people or areas in need. As kids, we always knew when we got home after school that there would be a warm cake or fresh cookies for a snack before starting our chores and homework.

She attended a home nursing class so that she could tend to all the things that ailed her kids. But then was also on call to tend to many a neighbor.

She frequently cleaned house for neighbors or did their ironing or helped with household or ranching needs. She was "home health" before there was home health.

She was active in the Pine Ridge Church, serving on the board during a time of many upgrade projects, sang in the choir, had parts in the community plays, and was always available to help with community activities.

Unlike "The Grouch" where you have to search the headlines to see what he's addressing, she had a weekly segment called "Gems". That was the first thing you looked for to see what or who she was highlighting that week.

She served as an integral part in getting the museum to purchase the current location and was a lifetime member. In the early days of Jubilee, she would cook all the sausages for the Jubilee Breakfast. She continued to support the museum until her death.

She believed in the Logos program and its curriculum to bring Jesus into the hearts of the younger generations in Moorcroft. Logos could count on her for many years to peel and cook pounds and pounds of potatoes for the Thanksgiving meal.

Her passion was hunting, fishing, gardening and the ability to share her bounty with others. Northeast Wyoming was her home for all of her life and she promoted the area every chance she got, including opening her doors to a traveler from South America who had the misfortune of breaking down along the road. In the few short weeks he was here, she had driven him all over the area to show off all the beautiful scenery, wildlife and industry.

Edith's family meant the world to her. Running the ranch, milking cows, calving, etc. never prevented her from attending all the kids' activities, including traveling to out-of-town basketball games or agreeing to play in a pick-up game in which Mary broke her finger. She sewed clothes for all the kids, crocheted beautiful doilies and later crocheted over 200 broomstick Afghans with her mom. 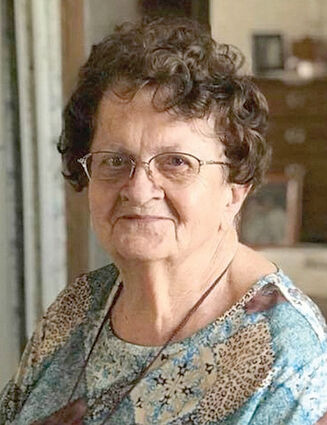 In her later years, when it wasn't so easy to get around, she was the consummate letter or card writer and often made phone calls to cheer up friends not feeling so well or to check on their wellbeing. She was quick to appreciate a good deed or something special and made sure it was acknowledged. Citizens of Moorcroft honored her in 2019 with the Life Time Achievement Award for her contributions to the community.

Edith is survived by her five children, seven grandchildren, 16 great-grandchildren, and one great-great-granddaughter. She was preceded in death by her husbands, parents, brother (James D Wham, Jr), and son-in-law (Terry McKillip).

It's not the years we spend on earth, but the love we share while here.

Funeral services will be at 10 a.m. on Friday, March 11, 2022, at the First Presbyterian Church in Moorcroft. Burial will take place at Black Hills National Cemetery at 2:30 p.m.