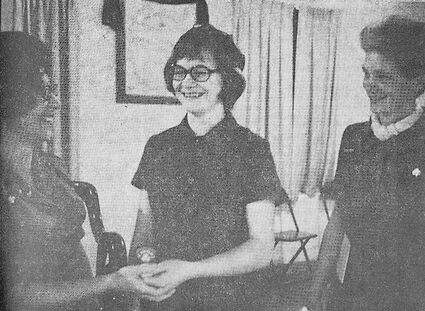 A twelve pound boy was born Friday to Mr. and Mrs. Leroy Gast.

A new Triumph Oscillograph Wobbulator, known as the "X-Ray" of radio has been installed by Harry Clingan at the Western Radio Shop in Sundance. With this new piece of equipment Clingan says that he is able to see the signals that go through a radio set and is thus enabled to do better radio corrective work than with any other equipment available.

The City of Sundance started using R.E.A. power Tuesday after completion Monday night of arrangements between the city of Sundance and Tri-county Electric Association of payment by the R.E.A. to the city. L.G. Landers, manager of the Tri-county Electric Association said that it would be mandatory that all users sign a membership card before they could be supplied with electrical energy.

Reverend Clayton says that on Saturday a group of fifteen met on the J.H. Lincoln ranch and cut logs for a new church in Sundance. Others worked part of the day, Monday. It is estimated that there is at least 15,000 board feet cut which is about one third the amount needed.

Sundance veterinarian Dr. James T. Summers said this week he is moving to Lander where he has purchased the hospital and practice of Dr. E. S. Norton. Summers has operated the Crook County Veterinary Clinic here since June 1964.

Robby Follum and Jana Green of Sundance High School ae soon to be published poets. Earlier this year, both authors entered a poetry contest for young poets from the Rocky Mountains. Only the best poems are selected for this honor. Green and Follum will have their poems published in the anthology A Celebration of Young Poets.