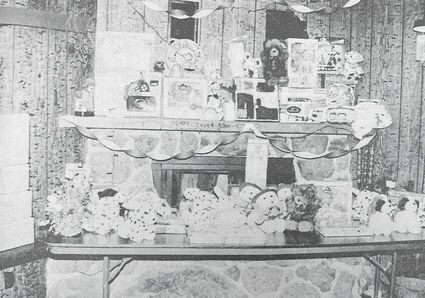 25 Years Ago, Dec. 19, 1971 - For the past 15 years Alice Schloredt and the Dime Horseshoe Bar have done a great deal to make Christmas a little happier for some of the less fortunate children in Sundance. Alice buys and wraps the toys and usually delivers them as Santa's helper. She thinks more people should try to it and be a little more generous around the holidays.

The final chapter of house cleaning for Crook County ended when Special Deputy L.C. Hurtt arrived with Andrew Mickelson in custody, who is charged with moonshining in connection with the still which was found at his ranch in Grand Canyon.

The Christmas entertainment committee has arranged all details for the Christmas tree to be given Saturday evening in Commercial Hall. A fine spruce tree has been secured, which will be loaded down with the usual good things for boys and girls at this time. Program arrangements include a fine selection of Christmas music and other features. Everyone come and bring the children.

County commissioners John Thorn, N.H. Thompson, and G.R. Bush met with the Forest Service at Denver and the Wyoming State Highway commission at Cheyenne first of the week. Mr. Thorn informs us that prospects look very favorable for some action by the Forest Service before a great length of time, on the road over the Bear Lodge and as far this way as Hulett. This road has been placed at the head of the list of roads on which money is to be spent by the forest service – Hulett Globe.

That Willet Keyser, former F.S.A. supervisor in Crook County would replace Leland Landers as county agent for Crook county was reported from the agent's office in Sundance Monday. Keyser is snow employed in the Department of Agriculture in the wool grading division. He left Sundance in January 1939. He is expected to arrive early in January to assume his new duties.

The scholarship honor roll for women at the University of Wyoming for the fall quarter was released by the dean of women. The name of Daisy Blakeman, of Sundance, daughter of Mr. and Mrs. W. H. Blakeman, appears on the roll.

Wyoming is the only state in the nation without a law requiring drivers' licenses. Does Wyoming need such a law? From every quarter, including the legislative has come a big cry that Wyoming should require the drivers of automobiles and trucks to have licenses to perform that operation. The matter is sure to come up in the 29th legislature next month.

Sen. Cliff Hansen has nominated 17 young men from Wyoming including one from Hulett, to compete for his two 1972 Senatorial appointments to the United States Naval Academy. Included among the nominees are Steven N. Storie, Hulett; and Michael Jeffery, Upton.

A fourth fire phone for Sundance is being installed in the Crook County Sheriff's office by Tri-Country Electric Association workmen. Other fire phones are located at city hall, Sundance Barber Shop and the Bear Lodge Hotel.

Crook County School District No. One board members agreed to submit another bond issue to the voters for replacement of the elementary school building in Sundance. During the meeting, board members also approved a motion to start negotiations for the Policky property in east Sundance as a site for the proposed new elementary school.