This Side of the pond

Notes from an Uprooted Englishwoman

My desire to visit Disneyland was triggered by two things. The first was a photograph of an entire slice of chocolate cake defying gravity atop a milkshake, because if you're going to indulge your greed then you might as well do it properly.

This delightful treat, named the "Cake Shake", is only available in Downtown Disney, the shopping area outside of the park. I wanted nothing more than to jam a spoon straight through the top of it.

The second was also a photograph, this time of my friend (and now travel partner) clutching a churro and a bottle of water, standing on some sort of raft while looking thoroughly bewildered.

The story behind the photo was that she'd come down with a virus during a visit some years ago, and her mom for some reason decided that the best thing to do would be to dispatch her to Tom Sawyer Island in the center of Rivers of America with supplies to keep her fed and watered. We've questioned this many times, but she still isn't willing to divulge her reasoning.

My friend has never been able to tell me what's on Tom Sawyer Island, because she was delirious with fever by the time she got there. I really wanted to be with her when she went back to see if her tales of terrifying monsters in caves and a rickety rope bridge across an abyss were anywhere close to the truth.

Mostly, I wanted to see her face when the bridge was just a standard wooden walkway and there wasn't even a cave, let alone a monster.

These things were uppermost on my mind when our plane landed in Anaheim on Saturday and we spilled out on wobbly legs into the Californian sun. But first, I was going to need my ears.

These – as you know, if you're a Disney alumnus – are a rite of passage. Entering the park without a sparkly mouse-ear headband would just be plain wrong.

Thus began an hour or so of tearing around the stores in Downtown Disney, clutching at least five headband options at all times. I put some back and picked them up again, made my choice then changed my mind, but finally settled on the pair I'd already decided I wanted before I left the house.

Now the fun could begin...except we were all exhausted from the journey. In our defense, we did start out at 2 a.m., so it already felt like the middle of the night before the sun had gone down.

We gorged on Mexican food in Tortilla Joe's, then hobbled back to the hotel for a good long sleep. The next morning, I walked through the gates of Disneyland for the very first time, safe in the knowledge I had three veteran guides to steer me through the park.

And what a moment it was. Disneyland is probably one of the most famous vacation destinations in the world, not just America, so it's not as though I didn't know what was I was getting into. Still, nothing prepares you for that feeling of coming home.

From enormous Christmas trees to my first glimpse of the steamboat, everything was magical. We sipped lattes in the flower market and chewed churros by the river, sang along with parrots in the Tiki Room and posed for photos with Jack Sparrow.

And of course, we went on the rides – so many of them, one after the other. Despite the park being at max capacity, we seemed to have uncanny luck with the lines.

We managed to pack an impressive nine rides into the first day – and not just because we'd awoken at the crack of dawn to arrive well in time for the rope drop. We even managed the Matterhorn twice, which I'm told is an impressive feat: apparently, it's the ride that goes down the most often, usually while you're standing in the line.

Not even Rise of the Resistance defeated us, despite going down for most of the first day and sporting a line length even the most enthusiastic Star Wars fan would baulk at on the second. We zipped through that one in less than an hour, which isn't bad if you consider that the ride experience itself is over 20 minutes long.

I'd assumed that Disneyland would be all about patience, but I was pleasantly surprised by how devoted they are to keeping you entertained even while you're waiting to be entertained. The lead-ups are themed extravaganzas all by themselves, while the carriages seem to have been designed specifically to keep everyone constantly moving.

It's less about keeping still and more about casually strolling to your destination. This is done via temporary rope formations that are added to or removed according to the number of people waiting, curling around every available corner to make use of every lick of space.

I did worry I'd forget how to walk in a straight line by the time I came home, but I haven't zigged or zagged inappropriately since we landed...to the best of my knowledge.

By the time we staggered back to the hotel each night, I wasn't sure I wanted to retain ownership of my own feet. When we left, they were so swollen that the customs folks at the airport felt the need to conduct a second security scan just to make sure I wasn't smuggling contraband inside my ankles. 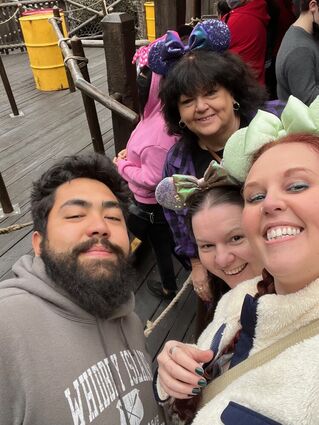 Did that ruin the vacation? Not even a pinch – the state of one's toes is the last thing to think about when there's monkey bread to be devoured and stores full of toys to be browsed. Disneyland may just be the apex of America's dedication to customer service, all wrapped up in cartoon-themed bows and glittering mouse ears.

I had the time of my life thanks to dear Walt and his three protégées and there isn't a thing I'd do differently (except, perhaps, to invest in a better pair of shoes). In hindsight, I really only have two regrets: even with all the advance planning we did, I was too full to try a cake shake, and we completely forgot about Tom Sawyer's Island.

I guess there's only so far advance planning will get you if you're easily distracted by pineapple soft serve. As to what's in the infamous cave...well, maybe some mysteries weren't meant to be solved.