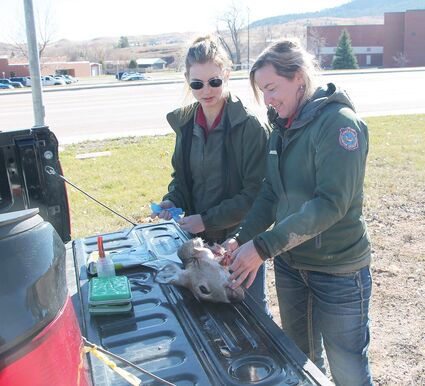 CWD Technician Liv Roy (Sheridan) and Wildlife Biologist Erkia Peckham (Gillette) examine a fawn head at the Wyoming Game and Fish Dept. CWD sampling station set up near C&A Meats on Tuesday. Roy noted the harvest seemed to off to bit of a slow start but anticipated it would pick up over the next few days.

According to Game Warden Chris Teter, hunting season this year will bring a mixture of opportunities and rewards across the local area, with elk most prevalent on private land, an excellent production season for turkeys but a disease-caused die-off among deer.

The Wyoming Game & Fish Department is also now actively monitoring the spread of chronic wasting disease (CWD) in deer throughout the state.

Epizootic Hemorrhagic Disease (EHD) has caused a "fairly significant" die-off among deer over the last couple of months, Teter says.

"White-tailed deer numbers are down about 25% area...