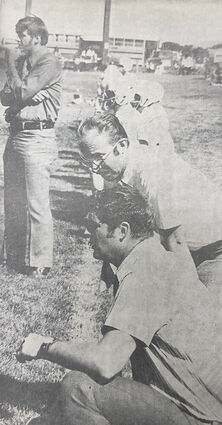 50 Years Ago, Sep. 16, 1971: Sundance coaches and players intently watch play during the third quarter of Friday's conference clash with Moorcroft. Head coach Neil Hoffine, in the foreground, enjoyed the afternoon as his club defeated Moorcroft 19-8. Behind him is assistant coach Dwight Jundt. Standing in left background is Sundance track coach Hugh Palmer.

The deer season opened in Wyoming last Friday and continues until Oct. 15. The outlook for snow right now is not as good as it might be to suit the hunter, but probably some will try their luck anyway and those are the ones who must immediately get next to one provision of the state law which makes it mandatory to "wear tied about his hat or cap a handkerchief or cloth of bright red color – not less than 18 inches square." Speaking to the Times about this phase of the hunting season, Game Warden Earl Banks said that the law must be enforced and anyone neglecting this precaution will be duly prosecuted.

It is reported that considerable excitement has been caused in the vicinity of Arvada by discovery of placer gold in that section. Rumor has it that a rancher's wife, a Mrs. Rose, residing about 18 miles south of Arvada, killed a chicken a short time ago and when it was cleaned three nuggets of gold were found in its craw. Old miners, hearing of the discovery, prospected the place and carried specimens from various places to the stream and panned them. One man found a number of gold nuggets.

The biggest event of its kind ever to be held in Crook County will be staged in Sundance October 4 and 5 when the Western Saddle Club will sponsor a race meet and rodeo with the assistance of Sundance businessmen and ranchers of the county. A total of $1500 in purses in addition to one-half of the entry fee money is being offered in cash to the winners of horse racing events, wild cow riding, calf roping and various other events.

Contractors from Lead, S.D., Bruno Holso and Arne Lagg, have started operations for the completion in Sundance for Ted and Don Rounds of a new building of seven dwelling apartments. The new structure will be stuccoed and plastered interior.

Harry Sawyer of Sundance took over the management of the Sandwich Shop in Sundance, having leased that eating establishment from Dick Dudrey, owner, who has been operating it since June.

Under legislation set to pass the U.S. Senate, the State of Wyoming will take possession of the historic Ranch A property and prevent it from being sold off, Senator Craig Thomas said. Thomas said the bill preserves the unique property for public uses and halts a plan by the federal government to dispose of Ranch A as "surplus." Thomas said that in order to ensure the area remains public; the legislation contains a "reverter clause" requiring the state to manage the property for public uses of have it transferred back to federal ownership.