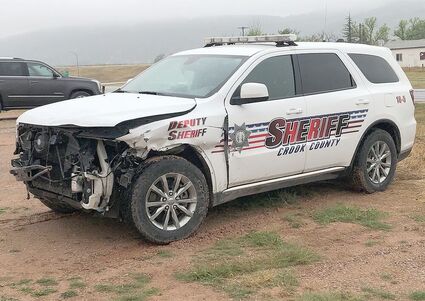 Deputy Kaminski's vehicle was damaged in the process of forcing the suspect to stop.

A Montana man was arrested near Sundance last week after a high-speed chase that involved the theft of three separate vehicles, one of which he allegedly used to crash into a Wyoming Highway Patrol trooper's vehicle and another that was involved in a serious crash in Campbell County.

Roger Forsman's flight was brought to an end when a Crook County Sheriff's Office deputy used his own vehicle to disable the Jeep that Forsman was driving. This decision was made for civilian safety as Forsman neared the City of Sundance.

"The Sheriff's Office priority at that point becomes the protection of...