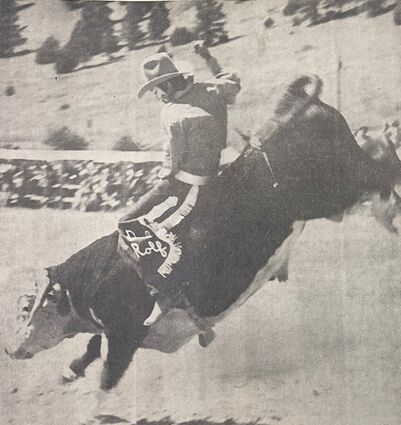 50 Years Ago, Aug. 19, 1971: Dallas Rolf hangs in there tough on a salty bull at Sunday's Crook County Rodeo. Rolf is in his clown makeup. The show probably had the two youngest rodeo clowns in the U.S. Rolf, 19, teamed with Bruce Cundy, 18, as "Inky and Stinky". The boys stepped into the job "on impulse" since no professional clowns had been hired. They are toying with the idea of making this a career.

The date of the Crook County Fair has been set for September 10, 1921. Because of the busy season and also because of the critical financial conditions now in existence throughout the nation, it was decided that it would be better to attempt just a one-day fair this year. Everyone in the county should begin now to prepare exhibits for this fair.

The editor was certainly too tired last week to note that the chicken season closed on schedule, but it did. It was a glorious 15 days of sagebrush, gumbo and cactus. The birds were plentiful and all creels were filled. Among the bags may be noted a full grown coyote by City Marshal Hooper, a Bleirot hawk by Dr. Calvert and a 7-point rattler by the editor, who never saw the brute till after execution.

Frank Farrell was over from Hulett last week and announces that he has bought the Alzada Fairplay and will take possession about Sept. 1.

Sundance now has a new and completely up-to-date beauty shop. Monday of this week Mrs. Ray Bryan opened the new shop which, will be known as Marna's Beauty Shop, in the new Bryan building with Miss Earleen Powers formerly of Powell in charge.

M.O. Trego and Mayor Jay Durfee had the honors last week of suppressing a fire with the new fire truck recently placed at the disposal of the city by the forest service. Thursday evening a truck loaded with lumber and owned by Roy Huseby caught on fire about four miles east of Aladdin. A call for help in putting out the fire, which was in timber land, was sent to Sundance. They suppressed the fire with the new equipment, thus eliminating any possibility of it spreading. Trego said they really woke up the valley with the truck siren.

The unofficial tally of the 1996 primary election for Crook County shows that 1814 voters cast their ballots. In the race for U.S. Senator on the Republican ticket, Michael B. Enzi took received 611 votes to 386 for John Barrasso. The only hotly contest county race was that for County Commissioner on the Republican ticket. The apparent winner of that race was Donald H. Roberts with 774 votes.