Terry Newlin was a great father, grandfather, friend, and patriot who left this world on June 27, 2021, at the age of 74.

He was born to Russell and Patricia Newlin on April 30, 1947, in Sioux Falls, South Dakota. The family then moved to Sundance, Wyoming, where they lived on a ranch and Terry attended high school. This is also when he developed his love for cars and horsepower.

After high school he was drafted to go to Vietnam and enlisted in the Marine Corp where he served four years. He served one 13-month tour in Vietnam where he fulfilled is duties as an artilleryman and tunnel rat.

After returning from Vietnam, Terry was selected to serve as part of the ceremonial guard, where he protected President Johnson and Nixon at Camp David. While stationed in Washington, DC Terry met and married Marsha Dragoo in August of 1969. They had two children, Jason and Michelle.

After his time in the service, he returned to Sundance where he started a mechanic shop which he ran for the next 45 years. During this time, he found joy in employing young men who he mentored on cars and in life and remained close with many of them until his passing.

Terry was an amazing father who loved taking trips and spending time with his children, he liked to say every trip with him was an adventure. In everything they did he was their number one fan, traveling to every game and event. He coached Ryan in football and baseball from a young age, and taught him that rubbing dirt on it can fix almost any injury.

Terry lived his life at full throttle and never shied away from an adventure. He loved spending time with his friends and family where he was always quick with a joke or a story, many of which involved a near death experience on one of his adventures.

In his later years he enjoyed riding his motorcycle, snowmobile and learning to sail. He mostly looked forward to spending a week with all five grandkids during the summer who affectionately called him GT (Grandpa Terry). 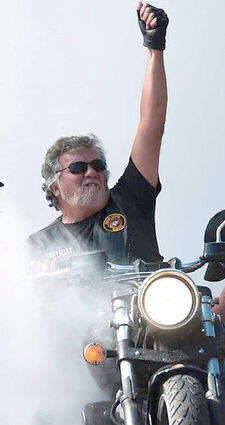 Terry had a contagious love for life and will be missed by those he leaves behind. He is survived by his brothers, Kelly Newlin (Donna), Kim Newlin (Mary) and Scott Newlin (Melony); his three children, Ryan Newlin, Michelle Wentz (Mark) and Jason Newlin (Janel); grandchildren Chase, Lane, Cameron, Wyatt and Brandon and many close friends whom he considered family.

He is preceded in death by his wife, Lori Newlin and his parents, Russell and Pat Newlin.

Gathering will take place at Fidler-Roberts & Isburg Funeral Chapel in Sundance at 1 p.m. on July 30, 2021, to process to the cemetery. Burial will take place at Black Hills National Cemetery at 2:30 p.m. with full military honors.