Our father, Richard R. “Dickie” Proctor, left his earthly home on May 6, 2021, in Sundance after multiple times sharing this sentiment with his family: “I’m 91. I’ve lived a GOOD life. I’m ready to go.” Even though we are very saddened and will miss him dearly, we understand, “Father Knows Best.”

Born on January 16, 1930 to Richard and Mildred (Mutt) Proctor in Casper, Wyoming, Dickie grew up on the home ranch west of Hulett. He attended country school, walking or riding horseback to get there.

Later, he boarded in Hulett and attended high school where he enjoyed being on the basketball team, often sharing stories of playing games in the basement of Old Stoney. He graduated from HHS in 1948.

On November 12, 1949, he married Rose Zella Wells. They were happily married for 70+ years. This union was blessed with six children: Debbie, Dana, Rick, Randy, Kelly, and Kyle.

One of Dickie’s first jobs was at the sawmill at Devils Tower. In the early ’50s, he got a job with the Wyoming State Highway Department in Sundance; mostly working on the survey crews.

He was proud to have worked with many crews and contractors that successfully completed I-90 through Crook County in the 1960s. He retired from WHD in 1987 after 37 years of employment.

Dickie was fortunate to have many years of retirement doing his favorite things: “puttering around”, tending his properties, driving his tractor, gardening, traveling (he loved touring all corners of Wyoming), attending rodeos especially the annual Hulett rodeo, listening to others tell their stories when visiting, fishing and elk/moose hunting with his neighbor and good friend, Jess Kanode.

Their annual October trek to Jackson Hole with hunting camp up in the Gros Vente was a yearly highlight. The annual May trip to Deerfield Lake took advantage of the South Dakota free fishing days. Last year his diary pages showed that, “we took a wrong turn after Mallo Camp and I saw country I had never seen before” which was a delight to him.

He also loved to collect things that he considered to be “treasures,” which he often found at auctions, bargain bins or the railroad salvage store in Belle. The real value of his treasures was that when his kids needed something, he could very often find it in his stashes.

Throughout his life, going for drives on the back roads of the Bear Lodge, Black Hills or Big Horns was top entertainment. In the early days, the back road adventures were in an old Willy’s Jeep that overflowed with Proctor kids who learned to love the outdoors from him.

This continued right up to his final days, when we drove the beautiful circle from Sundance to Devils Tower through Hulett to Aladdin and back home, seeing many white-tail deer and turkeys. On these trips he wonderfully shared stories about his past and about all the places we passed as his memory stayed strong for all 91 years.

Dickie was an active member of the Sundance community, serving as a volunteer fireman (SVFD) for 35 years, as a 30-year member and officer of the local I.O.O.F. and as a member of the Sundance Rod and Gun Club. He assisted with the Boy Scout troops, chaperoning camping trips in the Black Hills and Big Horns even in the middle of winter for the annual Christmas tree gathering.

He was a devoted and dedicated family man whose life revolved around his children. Father was an avid supporter of school activities, attending band concerts, 4-H programs, football games, wrestling matches and more. This past winter he was still tuning in the radio or TV to listen to Bulldog, Red Devil, Cowboy or Cowgirl games.

Our father taught us many life lessons for which we are grateful and thankful. “Use it up, wear it out, make it do or do without.” “It’s wise to save a nickel out of each paycheck.” “One never knows when that treasure will come in handy.” “A little hard work never hurt anyone.” “Go outside and get the stink ‘blowed’ off you.” 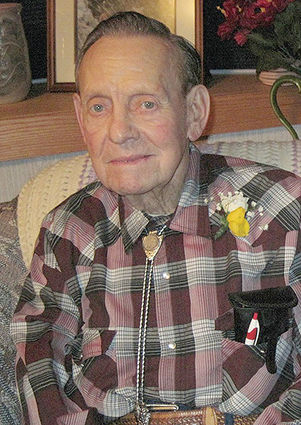 Still loving every minute we got to spend with him are his daughter, Debbie (Jerry Bennett); sons, Rick, Randy (Cristina Martinez), Kelly (Lola) and Kyle. He is survived by his sister, Tiny Bush; sister-in-law, Joe Dee Shellenberger; step- grandchildren, John, Chelynne (Levi) and Sarah; step great-grandchildren; nieces; and nephews. Also, by forever family friend, Mark Williams (Annette) who visited and called him often. His “dear wife” Rose Zella predeceased him in 2020 and daughter Dana passed away in 1972.

As per his wishes, cremation has taken place. Services will be Sunday, May 16 at 2 p.m. at the Fidler-Roberts & Isburg Funeral Chapel in Sundance followed by graveside rites at Green Mountain Cemetery.

A reception/lunch will follow at the Church of the Good Shepherd Parish Hall. Memorials have been established to Old Stoney (Crook County Museum District) or the Crook County Food Bank.