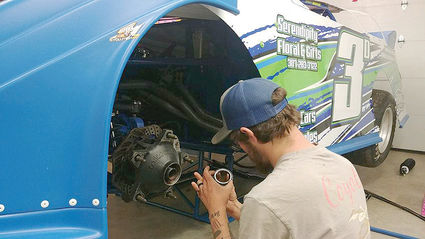 Former Sundance resident Dillon Johnson looks over a wheel bearing as he prepares to head out for a week of race action at Bristol Speedway in Bristol, Tennessee. Johnson will be racing his late model as part of the Dirt Nationals series that begins on Monday and runs through next Saturday. An estimated 1200 drivers, spread across eight classes, are expected to compete.

As part of its 60th anniversary celebration, the storied race track was covered in dirt and will host a number of dirt racing events, culminating in the first NASCAR Cup series race on dirt since 1970.