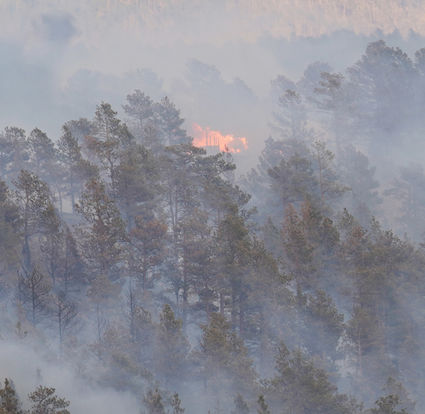 Three fires on Saturday can all be traced to a similar cause, including one blaze that entirely consumed a family home. Each began as an old slash pile that continued to smolder for several days before reigniting.

The largest of the fires took place in the Rifle Pit Rd. area and reached an estimated 104 acres in size. Firefighters arrived on scene around 4 p.m. to tackle it, says Fire Warden Doug Leis.

“It was a pretty violent fire,” he says. “It was the type of thing where you’ve just got to stay away from it until you can get a plan and attack it. The winds were ridiculous up here.”

The fire ultimately caused the loss of a house, garage and outbuilding, Leis says.

An attempt was made to save the house, but to no avail.

“We tried, but when the fire came up out of that canyon it ran the firefighters out of there,” Leis says. “We gave it a whirl, but we lost that battle.”

After the call went out, Leis says a total of 36 trucks turned up to help fight the fire, with 72 personnel from all across the county as well as Wyoming State Forestry and the Black Hills National Forest.

“We started calling crews in, got a bunch of people here and came up with a plan and worked it all night Saturday and all day Sunday,” Leis says.

On Monday morning, the fire was at 90% containment with a crew from Wyoming State Forestry on scene to assist with the final stages.

“[The cause] was a pit where some people had been doing some burning when cleaning up their property. They were burning limbs and trees and stuff and the wind got a hold of it and it got away,” Leis says.

“They’d been burning off and on through the winter and those things don’t go out in a day or two.”

It wasn’t the only fire caused by old slash piles on Saturday.

“We had a small fire on the Rockin D Ranch, it was only about three quarters of an acre, and then Hulett had a fire over on Hwy 24,” says Leis.

In the case of the ranch fire, the slash pile was a week ago and had been started just after it snowed. The Hulett fire was also caused by a slash pile that was one to two weeks old.

“It burns underground for weeks,” Leis says. “The wind just stirs that stuff up and gets it going again.”

Leis cautions the community that this is not looking like a good year for burning. Thanks to the lack of snow over the winter, the county is already as dry as it was in August and September.

“Our fire season right now is looking like 2012 and 2016 all over again. We’re going to need to be very, very careful unless Mother Nature gets kind and gives us some rain this spring,” Leis says.

“The timber is very dry right now, all the grasses are dry.”

Considering all this, Leis will soon be making a decision about whether to institute a fire ban.

“We’re asking the public to be very cautious,” he says.

A GoFundMe campaign is available to anyone who would like to make a donation to help the Halvorson family, whose home was lost in the fire. It can be found at http://www.gofundme.com/f/helping-the-halvorsons; donations may also be made at Sundance State Bank.