Budget crisis heads for the classroom 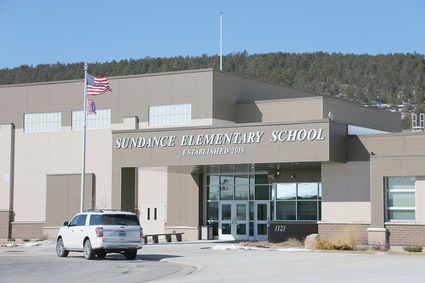 Making cuts to the budgets of Wyoming’s schools is no longer optional – it’s happening, says Representative Chip Neiman, whether we like it or not.

District #1’s new state rep organized a listening session with the Crook County School District (CCSD) Board of Trustees and staff members last week to share the depth of the budget crisis faced by the State of Wyoming and to ask for ideas and input as the Wyoming State Legislature goes about trying to solve it.

“We are kind of in a difficult situation at the state – I feel like a little dark raincloud wherever I go,” he joked, before turning to the serious business of outlining the facts.

The shortfall this year sits at around $300 million, Neiman said, and is slated to only get worse. Within two years, education funding will be short by more than $500 million, and that figure will continue to increase over time.

The state savings account through which the education budget has been backfilled is meanwhile dwindling, Neiman continued, and is expected to hit the $500 million mark by around 2025 to 2026. This is the cut-off point, he said: when the account hits that level, all backfilling will automatically end.

That’s not a choice, Neiman stressed, and it can’t be prevented – it will happen no matter what opinions anyone holds.

“Quite honestly…it boils down to: I can’t give you what I don’t have,” he said. There is a cliff ahead and we will reach it in two years, he said, so this is not a matter of him being able to simply not support any bills that cut the budget.

“We’re trying to figure out how to start stopping the bleeding – before it becomes a body,” Neiman said.

Two bills that address the education budget are currently under discussion by the House Education Committee, he said, and one would lead to deeper cuts than the other. Neiman stated his preference would be to see House Bill 89 move forward, which would cut around 3.7% from school budgets.

These cuts would primarily affect activities, said Neiman, and would also remove facilitator positions, reduce funding for administration and see teachers paid for five fewer days per year. He described this as the “least impactful” of the routes under consideration.

A second bill that Neiman suspects will gain more support came from the recalibration committee and would slash the budget by $100 million – double the amount in HB-89. House Bill 61 would also include a new 1% sales tax, the proceeds from which would be directed entirely to education.

That sales tax would only generate $164 million per year, which is only half the current shortfall, Neiman pointed out. That’s not enough revenue by its own to fix the problem – cuts will still be needed.

“Quite frankly, I don’t know what’s going to happen,” he said, suggesting that HB-89 might not even make it out of committee because it does not cut deeply enough.

Neiman told the board that such a sales tax could be a hard sell. Visiting with taxpayers around the state, he said he had found that, “Nobody has an appetite for an increase in taxes” at this time. Those he has spoken to feel the state should first control its spending on education, especially at a time when all other departments and services have taken steep cuts.

Despite the inevitability of the situation, attendees struggled with the notion of such dramatic cuts to the budget; some had questions about whether they could be avoided. Trustee Chase Williams was among those who expressed concern for the potential unintended consequences.

For example, Williams said, it’s likely that a district will find it needs to close smaller schools like Hulett.

There are so many “black holes” in the state budget that could be plugged instead, he continued.

At least the school system has an end product, he commented, unlike some of the other departments in the state. Why not cut the University of Wyoming instead, or Game and Fish?

Neiman explained that UW has in fact been cut by around $52 million, while Game and Fish is intended to be self-sustaining because it is supported by license fees.

Williams also pointed out that the cuts will affect the livelihoods of staff members and said to Neiman: “Some of the people who voted for you could be laid off.” Neiman responded that he cannot do his job with a view to pleasing everyone, he can only do his best to do the right thing for his constituents.

Neiman said he ran for his seat to be a conservative voice for Crook County and was frustrated when he arrived in Cheyenne and learned the reality of the situation. The can has been kicked down the road so many times, he said, and things have reached a point where choices are limited.

Legislators are often fearful that telling the voters what’s really going on will lead to them being voted out, Neiman said. He told the board that he does not want to be guided by that fear and will always endeavor to tell the real story.

Still looking for alternative solutions, Trustee Thayne Gray pointed to another piece of legislation under consideration, which would combine some of the districts in the state. Neiman agreed that this would help to reduce administrative costs, largely by reducing the number of superintendents, but said he is not sure how that discussion will go as there is a considerable amount of resistance in some districts.

Many attendees appeared to share the view that there will need to be additional income for the schools – it won’t be possible to simply cut the budget to the degree needed. Williams was among those who stated he can’t see another solution despite his personal conservative leanings.

Principal Jim O’Connor, Sundance High School, commented that he doesn’t believe anyone thinks cuts are unnecessary, but the sheer scale of those cuts will soon become “catastrophic” and he cannot understand why people don’t see the need for revenue if schools are going to continue to function.

“At some point, we’ve got to get an additional revenue stream,” he said.

Broderson asked how it is that all the surrounding states have come up with ways to fund their services and schools, but Wyoming has not looked to see what they’ve put in place to do so. Neiman responded that this is being taken into consideration, but pointed out that the only state with comparable school spending is North Dakota.

Even then, Wyoming spends more. According to Neiman, while North Dakota invests approximately $14,000 per child, in Wyoming it’s closer to $18,000.

Neiman acknowledged that the lower price tag in other states is partly a result of economy of scale. Whether or not Wyoming can follow in the footsteps of its neighbors, however, is something Neiman believes will boil down to whether individual taxpayers are willing to take on more burden.

If there is no appetite from taxpayers to build more revenue for schools, whether in the form of a 1% sales tax or something else, Neiman said, “That’s not going to be something I can support…they’re saying we need to try to start controlling our spending first.”

If taxpayers do actually support new revenue, Neiman says, that’s something he would need them to share with him. “It is not what Chip wants,” he said. “It’s what the taxpayer wants.”

Asking attendees to share any ideas they might have, Neiman expressed his desire to protect classrooms and teachers as much as possible and said this is why he would like to avoid a situation in which the necessary cuts are directed at teaching staff. Superintendent Mark Broderson, however, explained why this will be almost impossible to avoid.

According to Broderson, 80% of CCSD’s budget goes towards staff. There’s only so much that can be trimmed from the remaining 20%, so it doesn’t take a huge cut before teachers are affected.

One of the ideas being floated, said Neiman, is to impose a charge on school activities, such as sports. These are not included in the “basket of goods” the state is required to fund, he said, and could be a good place to make savings.

Broderson, however, explained the danger of placing a price tag on activities. Those kids who benefit most from the structure and role models provided through sports are the ones least able to pay a fee to cover their involvement, he said; those who need it most will be the first ones lost.

Neiman asked if we could perhaps reduce the amount of travel associated with sports. O’Connor said that travel and overnight stays have been greatly reduced over the last year due to COVID-19, and discussions have already been held about sticking to this new strategy in the future.

The idea of keeping staff salaries to a limit meanwhile met with resistance from O’Connor and Broderson, who pointed out that it will make recruitment and retainment of teachers even harder due to the need to stay competitive with surrounding districts. 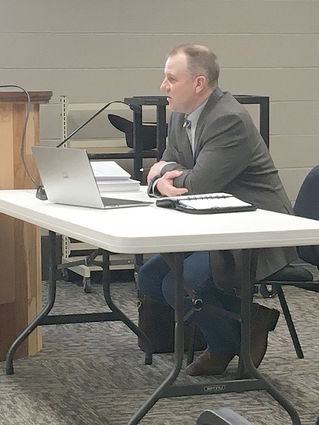 Other ideas Neiman shared included finding a new way to provide health insurance, such as by combining teachers with state employees, and getting rid of the “use it or lose it” mentality that sees districts spend everything given to them rather than have to give it back to the state. Neiman would rather see the state reward efficient districts for being “good operators.”

He also shared a suggestion to place the block funding in silos, so that only certain amounts could be spent on certain things. Broderson felt that might cause problems on the basis that Crook County can’t be funded in exactly the same way as Cheyenne.

The bills currently under consideration by the education committee were further discussed this week. If they pass out of committee, they will be moved up to the full House of Representatives.

This year’s session began on March 1 and will continue until April 2.