Randy Scott Beckman passed away peacefully, surrounded by his family, on February 6, 2021, at the VA Hospital in Sturgis, South Dakota. Cancer is wicked.

Randy was born June 25, 1950 in Sioux Falls, South Dakota, where he spent his childhood years. In 1969, he married his lifetime partner, Pam Sheetz and had two children, Thad and Jamie. The military draft called him to duty from 1970-72. After discharge, they remained in Sioux Falls for a few years before moving to the Black Hills.

He and partner, Damon Reel, owned Reel Industrial until retirement. Although not a carpenter by trade, he personally built the family two homes.

He was involved in Deadwood gaming, buying the old NAPA store and later turning it into The Iron Horse Inn. After retirement, he bought a piece of land outside Hulett, Wyoming, which he developed into a gentleman’s ranch. This involved learning so many new skills for a city boy and enjoyed it all: shoeing horses, caring for sheep and bum lambs, building water gaps, planting and harvesting crops.

He always knew he could not have done this without the help of his neighbors and often wondered how hard they were laughing at his bumbling ranching adventures and lack of knowledge. However, he did read countless articles and dabbled in You Tube to turn his adventure into another success.

Randy was a very giving person who always volunteered his time to the American Legion, calf branding, shearing sheep or handling livestock with the neighbors. He loved the outdoors through fishing, hunting, four wheeling and camping. You name it, he did it.

The past three winters found Randy headed down south to explore historical sites, museums and make new friends. One thing on his bucket list included skydiving, which he did in Arizona two years ago.

Randy leaves behind his wife of 52 years, Pam, and daughter, Jamie (Kevin) Mutter. Thad died in 2018. He has five grandchildren: Randi Rae Beckman of Casper, Zach and Isaac Beckman of Gillette and Riley and Ethan Mutter of Piedmont, South Dakota. 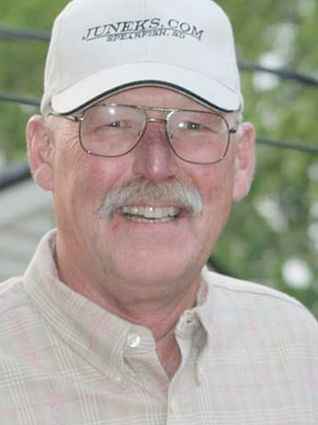 Randy also leaves behind his two younger brothers, Greg (Lois) and Brian (Carol), both still in Sioux Falls; sisters in-law, Wendy (Dan) Davenport of Arlington, Washington, Jil (Brad) Vaughn of Hills, Minnesota and Bobbi (Tom) Wilts of El Paso, Texas. He also has many nieces and nephews that will miss his political banter and laughter.

Services will be held at the Kinkade Funeral Home in Sturgis on Monday, February 15, with viewing beginning at 12:30 p.m. and services at 2 p.m. Cremation and burial will be with military honors at the National Cemetery later.

In lieu of flowers, memorial contributions may be made in Randy's name to the NRA, the Republican Party or the National Cancer Institute.