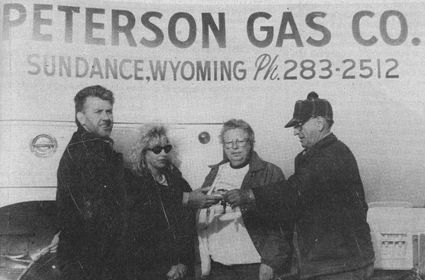 News comes from Gillette by grapevine that another holdup was pulled off there the latter part of the week. Hijackers blew into town and found a group of men in a café who looked good to them. A pair of sixes beat everything in sight, and a $2000 haul was made.

Earl Demarest of Moorcroft spent several days in Sundance the first part of the week, installing a Delco electric light system for M.D. Holbrook of the Cosy Corner Café. The new lights were turned on Monday and are certainly a fine improvement for the Cosy Corner. Mr. Holbrook had a large globe installed outside over the door, which really gives out a metropolitan appearance in the evening. As the system furnishes more light than will be necessary for one business house, Mr. Holbrook is furnishing others in the neighborhood with electricity and workmen have been busy the past day or two wiring the barber shop for Harry Burgett, the Monitor office and E.J. Smith’s pool room.

People are anxious for household appliances to again become available now that the shooting wars have ended. Chester Bowles, OPA Administrator says he is happy to announce that people will not have long to wait and the agreeable part is that this equipment is soon coming back at 1942 prices. “Price control is the enemy of inflation and the public is asked to help with price control at this time by asking to see OPA ceiling prices on equipment. Inflation is now our number one public enemy and with the people in possession of $146,000,000 of savings the inflation danger cannot be exaggerated. Do your part like a good soldier by refusing to pay more than ceiling prices.”

Eddie R. Chatfield, Sundance has been named weed and pest inspector for Crook County succeeding Lyle Crosby. Crosby is leaving the post Jan. 1 to take a job here with the Department of Agriculture, Division of Plant Industry. The weed and pest board also elected new officers during its meeting and Frank A. Pearson, Aladdin, is the new president. Other officers are Woodrow Vore, Beulah, vice president; and Dick Wilson, Hulett, treasurer.