Norma ‘Elaine’ Waugh, 83, died October 2, 2020, with her family by her side in Sundance, Wyoming. She is survived by her husband, Leslie Waugh.

Elaine was born October 13, 1936, in Hulett, Wyoming, to Hans Borchgrevink and Lucille (Tinkum) Borchgrevink. She was crowned Hulett Rodeo Queen in 1951.

Leslie and Elaine were married December 29, 1952, in Hulett. They left Hulett to live in Cody, Wyoming, for three years before returning to Hulett where they settled and raised their three children.

Elaine had a deep love for her family and was a very caring and giving woman. She also loved animals, especially sheep and horses, and could always be counted on to identify the bird varieties that visited her bird feeders.

Leslie and Elaine raised sheep on their land outside of Hulett and put the utmost effort into the flock. Elaine enjoyed gardening and put great care into maintaining a beautiful vegetable and flower garden.

For many years, Leslie and Elaine hosted paleontologists from the Black Hills Institute of Geological Research on a portion of their land that the family called ‘Dinosaur Hill’ and that was dubbed ‘Waugh Quarry’ by the Black Hills Institute team. Elaine thoroughly enjoyed partaking in the yearly fossil excavations and often talked to the groups about her adventures as a child searching for fossils on Dinosaur Hill.

In Elaine’s honor, the Black Hills Institute team named a fossilized Camarasaurus skeleton ‘Elaine’ that was excavated from the Waugh Quarry. 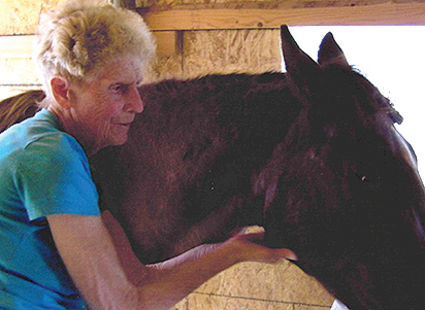 A memorial service is planned for spring 2021.