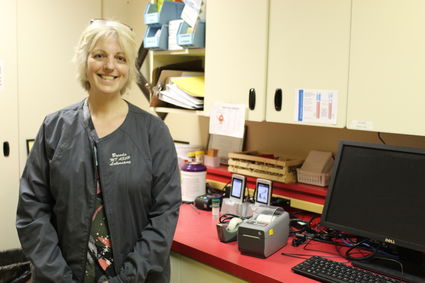 If you've met the minimum standards set for all medical laboratories in the state, is that enough to reassure patients you're doing the best you possibly can? Brenda Andrews, Lab Supervisor for Crook County Medical Services District, didn't think it was, so she set about proving her lab could meet the stricter standards of a private accreditation company.

It's a goal Andrews has been working on since she joined the hospital a year and a half ago, and last week her efforts were rewarded when she received word the lab is now officially recognized by the Commission on Office Laboratory Accreditation (COLA). All labs must meet the requirements of the Clinical Laboratory Improvement Amendments (CLIA), she says, but CCMSD has never before attempted to achieve this higher standard.

Not many labs do, Andrews says – there are few in Wyoming that can display the badge.

"We are still CLIA accredited, but now we are also COLA accredited. We've been really excited about getting policies in place and doing all the things that are required to meet COLA's expectations," she says.

"They did a two-day survey of the lab that was very intensive and very rewarding. It was very educational and he...said he was very impressed with our laboratory. We're good now for another two years and we're very excited about it."

Andrews was motivated to follow her goal partly because COLA offers educational assistance to the laboratories it accredits.

"If we have any questions or concerns about how to write a policy or handle a calibration or implement a new instrument in the lab, they are right there. We dial the 800 number and get someone who has maybe 30 years experience in the lab and can answer our questions," she explains.

"With CLIA, they are more of a government-run organization...COLA is a private organization so they are able to help us more one-on-one with our business, lab and things we need to do to meet regulations."

To achieve COLA accreditation forces a lab to up its game as there is much more to the process than is required by CLIA. The COLA accreditation process looks at everything from proficiency, procedures and maintenance records to instrument quality and personnel records.

"Everything down to they are pulling reagents out of the rack and making sure of our quality control, that the date it was opened and the date it expires is written on it," Andrews says.

"They pull patient tubes out of the rack and make sure they're labeled properly. They look at every single last thing...I've probably sweated bullets for the last two years waiting for them to come inspect, but it's worth it."

The inspection wrapped up last Wednesday. When Andrews arrived in the office on Thursday morning, the report awaited her.

"They rate you on proficiency and maintenance and personnel – there's probably 20 things," she says. "It was nice to see a lot of 100 percents."

Those 100 percents appeared in categories such as personnel, procedures and maintenance. In some cases, it was a case of improving from zero to 100 percent over the last couple of years.

Andrews says she is happy with the lab as it now stands, though there is always room for a little improvement. The goal, she says, is to maintain high sta