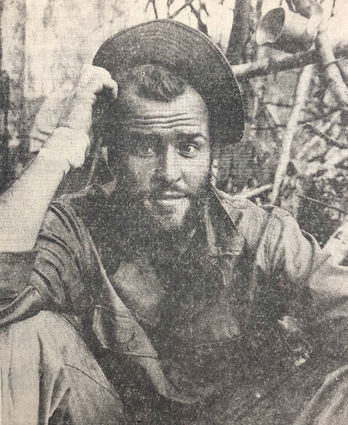 The above picture was taken in the jungles of New Georgia by a correspondent of "Yank" The Army Weekly, and accompanied a detailed account of "one of the U.S. Army's toughest jungle actions – the 12-day drive from Munda airfield to the sea. The picture appeared in the Oct. 15, 1943 issue of that publication with the caption: "Pfc. Cecil G. Crago of Sundance, WYO., used to work on a ranch. In the New Georgia fight he and his squad came close to being wiped out by the Japanese dual-purpose AA guns."

The Fifteenth Wyoming legislature comes to a close on Saturday of this week. Prohibition legislation has consumed much of its time, but the Fifteenth session will go down in history as perhaps the most memorable and important of any to date if for no other reason than the enactment of house bill No. 1 by Representative Hardin, designed to make Wyoming the first woman's suffrage state and the thirty-seventh to ratify the federal amendment, dry as a bone.

Results of the voting of the entire student body of the Sundance h...