She was the oldest of eight children, growing up on the family farm outside of Sidney, Nebraska. Gerry attended St. Patrick's Academy in Sidney through high school, graduating in 1947, and she was a student at Loretto Heights College for two years.

Gerry married John Bernard Lang in 1949 and moved to Pine Bluffs, Wyoming in 1950. She was a homemaker and mother of 11 children. Gerry worked in Pine Bluffs schools for 28 years as an aide and custodian, until her retirement.

Gerry was a devout Catholic, and saying the rosary was a daily devotion that gave her strength and comfort. When the family was growing, it was a common sight to see Gerry and the 11 kids scrubbed and polished, behaving (mostly), and taking up an entire pew at Mass at St. Paul Catholic Church in Pine Bluffs.

Being a true farmers daughter, Gerry was either praying for more moisture or less moisture, depending on the condition of the crops in the field. God blessed Gerry with a long life, a loving family and many friends. He also blessed her with a great sense of humor, which was a must in raising 11 children as a single parent.

Gerry loved being on "her corner" in Pine Bluffs, across from the football field in one direction and the swimming pool in another direction. She enjoyed her home, flowers, water aerobics, bingo and playing cards with friends. Rumor has it that more than jellybeans were exchanged at these card games. A great delight after retirement was joining her siblings for reunions at Black Butte, Oregon. 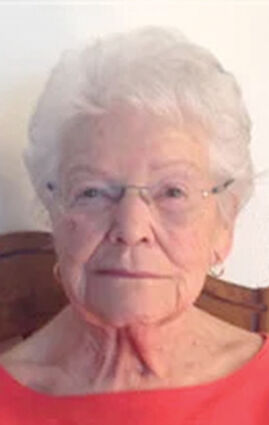 Rosary was Sunday, October 30 at St. Paul Catholic Church in Pine Bluffs and Mass of Christian Burial was held on October 31 at St. Paul Church, with Father Clark Lenz officiating. Internment of ashes was at the Pine Bluffs Cemetery and a luncheon at the St. Paul Parish Center followed internment.