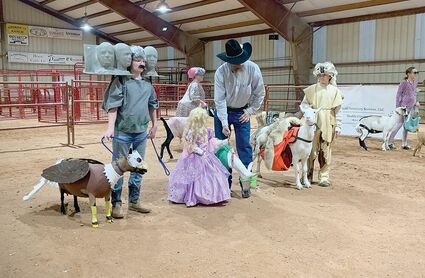 The day always begins with ht ecostume contest, which Tanja Miller describes as a great way to help everyone relax and show them the social nature of the event.

Now in its fifth year, the Black Hills Dairy Goat Association (BHDGA)’s annual show has well and truly hit its stride. The popular event attracts hundreds of goats and their owners to the Crook County fairgrounds for a day of competition.

Organizer Tanja Miller says that what stands out most about the evolution of the show is the difference community makes. From the volunteers who make the show run smoothly to the donors who contribute touches both big and small, her goal has been to involve as much of the community as possible.

The cookies given to the winners this year, for example, were made by a baker from Rozet, one style to represent the association’s logo and the other to picture specific breeds of goat.

“They were just amazing, everybody was just blown away,” Miller says.

“We had a raffle for it and we were compared to national shows for prizes. Everybody came up and said they’d never been to a local show where they gave away a kidding set-up,” she says.

Locally produced pizza was offered free for lunch by the association, which was highly appreciated, Miller says, but which also fulfilled another of her personal goals.

“I love to give the winners something, but this show is sanctioned where you have to have ten of every breed and we need the smaller breeders too and this show is really focusing on showing that we appreciate everybody,” she says, referring to the show’s status as sanctioned by the American Dairy Goat Association.

“You don’t have to bring 20 goats, you can bring two and you get treated just as nicely and just as fairly as a big breeder.”

The show would not go on without a lot of assistance in the form of local volunteers, Miller says, admitting that, at first, they were a little trepidatious about being involved.

“Now, my volunteers are fighting over who can do what,” she laughs. “The volunteers are awesome, they’re starting to really know what they’re doing so they don’t need a whole lot of introduction any more, they kind of just show up at 8 a.m. with their pencils sharpened and they’re ready to go.”

The Bearlodge FFA chapter and BHDGA meanwhile have a symbiotic relationship in which the association supports the group with a financial donation and the FFA kids are hugely important to the show through the assistance they offer each year.

“They help us put the panels up and take them back down. We couldn’t do it without them – they are so good at it,” she says. “Brian Kennah brings down one class at a time for 45 or 50 minutes and we can really get stuff done.”

The banners were made by a design company out of Newcastle, while Ken Karey, Fair Maintenance, and Carolyn Fowler, Fair Secretary, provide maintenance and administrative assistance, Miller says. Local 4-H club No Goats No Glory undertook a fundraiser of coffee and breakfast pastries, then daytime snacks, to raise money for its annual fun day.

“We’re really trying hard to include all parts of the community,” Miller says.

Back when Miller first introduced the show, goats weren’t a particularly popular animal in this county. At this year’s county fair, however, there were more meat goats on display than sheep – the trend appears to have taken off.

“I think goats had just such a bad reputation and I think a big part of what this show does is show the goats and their owners in the best possible light,” Miller says.

“It shows what they look like, what you can do with them and the event is so social and geared towards the kids and community that it really inspires people to want to be part of it.”

New arrivals to the area may also be having an impact, she continues.

“Also, we have more and more people who are moving in on small acreage. They can’t have a cow, they can hardly have a couple of horses, but a goat you can,” Miller says.

Expounding on the virtues of proper breeding, she says that locals are now realizing, “If you have to spend time, money and effort on an animal, you realize let’s not just get a goat from somebody’s back yard, let’s get a well-bred producer that has numbers behind her to do what she can do and what her offspring will be able to do. I think the quality in general is going up, and the more quality you have, the more you’re looking towards these breeders for replacements or to add something.”

Locals do take part in the show, she says, but generally bring small numbers.

“We don’t have a lot of local breeders who have huge goat numbers, but more and more we see two or three goats. We have an FFA member now who is showing,” she says. “I think people just didn’t realize that something like this was out there.” 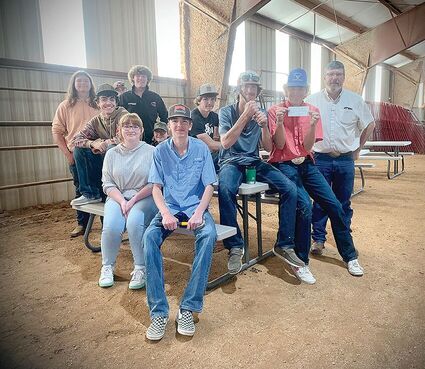 Members of the Bearlodge FFA club with ht edonation received from BHDGA to support them. The FFA kids are instrumental in getting the fairgrounds ready for the goat show.

Miller believes this was reflected in the numbers, but was still thrilled to host around 80 people including entrants and exhibitors.