A memorial service for Frank Stevens, age 74 of Gillette, Wyoming, was held on Monday, September 12, 2022, at the CAM-PLEX Heritage Center Theater with Pastor Marty Crump officiating. Francis Eugene Stevens passed away due to natural causes on September 4, 2022, while working on his treasured property in the Black Hills of Wyoming just outside of Hulett. Wyoming was home for his entire life.

Francis Eugene Stevens, known to his friends and family as Frank, was born in Newcastle, Wyoming, on June 23, 1948, to Edward D. Stevens and Esther (Watt) Stevens. He was the fourth of four children that included Kay Martinez (Frank), Edward Stevens (Linda) and Mary Hart (Dan). He was raised in Upton, Wyoming, until the 8th grade when the family moved to Pine Bluffs.

He was involved in many high school activities including basketball, football, track and band. Upon his graduation from Pine Bluffs High School, he joined the Army National Guard where he played the trumpet in the 67th Army National Guard Band. Frank attended the University of Wyoming to study business and education while he was a member of the Guard.

Growing up, he always wanted younger brothers or sisters and Chris was the oldest of eleven children. Frank loved his extended families, brothers-in-laws and sisters-in-laws that included the Stevens, Watts, Martinez, Harts and Langs.

After a year of teaching high school business classes in Riverton, Frank and Chris moved back to Laramie where Frank attended the University of Wyoming College of Law (Class of 1976). Frank would go on to spend his entire life devoted to his callings in education and the law.

The couple moved to Gillette upon his graduation from law school to start his legal career and private law practice with Stanley Sheehan and Tom Sansonetti.

Frank was a founding partner of what is now Stevens, Edwards and Hallock, P.C. His work as an attorney in Gillette spanned over 46 years – 34 of those years practicing with Jim Edwards, Joe Hallock and their valued staff. Frank's legal career was spent serving his friends, family and the northeastern Wyoming communities.

He considered it his duty and calling to serve and mentor others by promoting justice and faith in his practice and the numerous boards that he served on or represented. These boards included: Campbell County School District, Campbell County Public Land Board (CAM-PLEX) and most recently Gillette College.

Frank was a member of numerous Wyoming State Bar committees including serving as a chairman of the Ethics Committee and being a member of the Judicial Nominating Commission. He valued his membership and colleagues in the Christian Legal Society.

He also served as a Magistrate Judge for the Circuit Court in Gillette, a City Judge for the town of Sundance and a Justice of the Peace in the Sixth Judicial District of Wyoming.

Outside of the office, Frank loved hunting with friends and family. Many of his favorite stories come from his time in elk hunting camps and on horseback near Turpin Meadows Ranch with his dearest friends. Hunting deer with his son, Paul and South Dakota pheasant hunts with Doug's extended family and the Howells were also his hobbies.

He was an avid handball player on the local courts of the Rec Center and a runner until an unfortunate hip surgery ended his ability to participate in those activities. He loved attending his grandkids' soccer and basketball games, and going to many cultural events (musicals, concerts, theatre) and sports events (National Finals Rodeo, pro football and baseball) with Chris and the family over the years.

He had a wide range of music and sports interests that were passed down to his children. Many afternoons were spent on soccer fields and basketball courts with penny loafers when he did not have time to switch into sweatpants while rushing from the office.

Frank's Christian faith and family were the foundation of his life. His seven grandchildren, Isaac, Caleb, Andrew, Eli, Julia, Edward and Gabe, brought him immeasurable joy over the past 21 years.

Perhaps the highest priority in Frank's life was raising his family and serving in the local church. He served the Wesleyan Church for over 30 years.

His roles in the church included board member (Local, District, General and Oklahoma Wesleyan University Trustee), choir member and, most importantly, Sunday school teacher and Superintendent. He worked hard to raise his family in the church and to form bonds with members of other local churches.

Frank also helped develop his children's passion for singing by listening to rehearsals for Sunday services in the family's living room. Sunday afternoon dinners with the family and grandkids were always a top priority.

He most recently enjoyed working with Chris and the family on his hunting property, also known to the family as the Hulett House, located on Strawberry Hill Road in Hulett, Wyoming. He had a vision for this property as a location for family retreats and as a place for future friend and family hunts.

When not practicing law or attending events with family, Frank was known to love a good project, and the Hulett property offered those opportunities in spades. 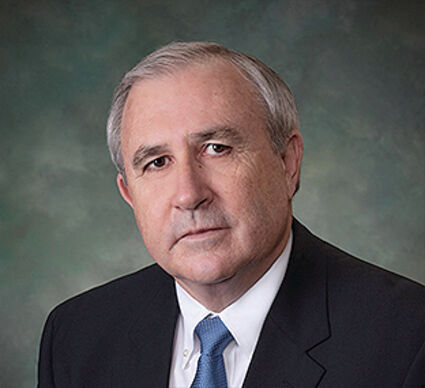 Donations may be made to the Gillette College Foundation, 300 W Sinclair, Gillette, WY 82718 or Prison Fellowship, PO Box 1550, Merrifield, VA 22116 in Frank's honor. Memorials and condolences can be sent in care of Gillette Memorial Chapel, 210 W. 5th St., Gillette, WY 82716. Remembrances can also be shared online at http://www.GilletteMemorialChapel.com