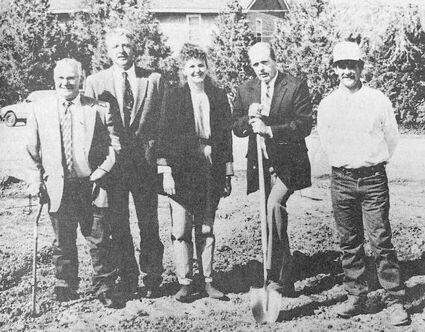 In referring to the petitions for naturalization last week one of the mysteries of the Bear Lodge was brought to wind. The petition of Thomas Whitelaw has been on docket for many years, and at this session the case was dismissed. At the time of his petition, Whitelaw had proved up on a homestead and his deed was held pending the receipt of citizenship. Whitelaw was prospecting in the Bear Lodge, and had a cabin somewhere in the mountains. The last known of him was when he left Sundance one cold winter day to return to his cabin against advice of his friends here. Those acquainted with the facts are of the opinion that he met with mishap, and perhaps his bones are in some secluded spot in the mountains, or in the bottom of a prospect shaft.

Commissioner Taylor started work yesterday on the road from Sundance to Warren Peaks. With the donations and county co-operation it is planned to make the road easy for auto travel this summer.

A truck loaded with lumber, driven by E.L. Calvert and owned by Geo. Holben of Spearfish sideswiped a car drawn trailer house owned by G.E. Lipton of Manly, Iowa Friday afternoon a short distance east of Sundance tearing out the side and end of the house. The wrecked trailer house was purchased by C.D. Roberts of Sundance.

County Clerk Francis Hejde said Tuesday that the Board of County Commissioners had been advised by the state highway commission that unless there was something unforeseen, contracts for building of the Hulett-Alva road would be let in the near future.

The Wyoming Game and Fish Commission at a meeting June 2 cut the deer season in a portion of Area No. 4 in Crook County from 90 days to 60 days. In May at a special meeting here, the Crook County Wildlife Association had protested the 90-day season set for the area, which included 18,340 acres in southeastern Crook County.

Five Crook County women placed in the recent Wyoming Women's Annual Bowling Tournament. They are, Virginia Orr, Sundance; and Geneva Gill, Effie Robinson, Mary Ann Robinson and Shirley Stewart, all of Moorcroft. Geneva Gill was the only to place in the Class "A" for all events. She won $6.70 with a total of 1761 pins.