Literally the thirteenth child in a baker's dozen, Ruth "Peggy" Magdelene Gaddis Cronn was born on November 6, 1921, to Tilden A. Gaddis and Barbara Wolf Gaddis.

Peggy attended Washington High School in Sioux Falls, where she was part of the class of 1939.

Peggy married Robert Louis Cronn on September 27, 1941. They honeymooned in the Black Hills and were at Devils Tower when Parachutist George Hopkins landed on the Tower.

Shortly after the move, Steve, their second son, was born at the hospital in Deadwood, South Dakota, November 3, 1947.

Peggy and Bob had come to the Sundance area to ranch. They lived on Williams Divide until they purchased their place south of Sundance. It was on the Divide where Peggy met her life-long friend Beverly Lincoln Peterson.

Peggy and Bob drove the local school bus for many years and were always generous with a large Hershey's Chocolate bar for each rider at Christmas. On the last day of school, the bus stopped at the Tastee-Freeze on the way out of town.

Peggy could be found many times on the front seat of the bus with a laundry basket beside her. She never had a washer or dryer on the ranch and did her laundry in town until she moved to Green Mountain Estates, where her end-of-the-hall apartment was next door to her old friend, Bev.

Peggy worked for eight years at Sundance State Bank. Peggy and Bob were founding members of Chapel of Faith. Their faith and dedication were an example to many.

Peggy enjoyed playing Bridge with a group of ladies who took their game very seriously. She was a member of the Red Hat Club, Farm Bureau and the Gideons. She enjoyed the Jim Thompson programs at the Heritage Center in Spearfish and the work day stopped for lunch when Paul Harvey came on the radio.

In their retirement years, Peggy and Bob enjoyed traveling. They spent many winters in California and even made a trip to Hawaii. They took several Model A tours and traveled throughout Mexico with a Model A group. 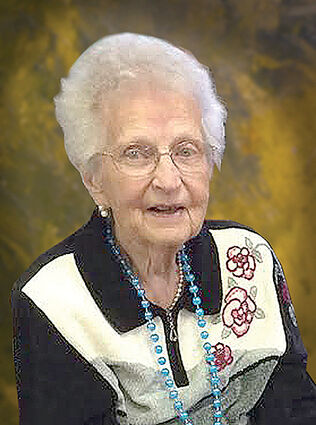 Peggy was proud of her granddaughters (daughters of Lee and Judy) Carolee, Susan and Sharon. Unfortunately, at the time of this writing, we were unable to make contact with Lee's daughters to properly recognize descendants.

A Celebration of Life will be held for Peggy on Saturday, May 21, starting at 11 a.m. It will be held in the courthouse basement with a potluck to follow, because Peggy always enjoyed a good potluck.