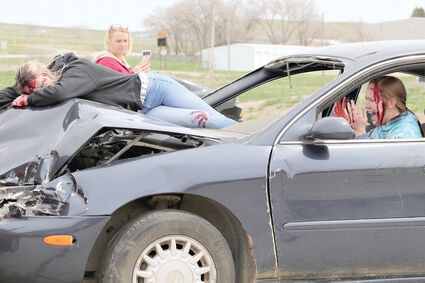 Wyoming Highway Patrol trooper James Rose started the day with this advice to the assembled sophomores and freshmen from Moorcroft, Sundance and Hulett: "You'll get the most out of today if you are willing to participate...the best thing I can tell you is participate."

Moorcroft Police Chief Bill Bryant joined forces with Rose and Lisa Williams in a new program called the 307 Teen Challenge at the Moorcroft Town Center (MTC) last week. This instruction is similar to the Freshman Impact Program from previous years, addressing Internet security, drug and alcohol use, dating and teen violence and suicide prevention among other things.

As the event began, Jake Schommer of Sundance voiced the prevailing attitude regarding what they would learn, saying, "Probably, that it's not really smart to drink and drive".

He said he was looking forward to the presentation. This was the first event of this kind he had attended.

There was, though, a special opportunity for students to interact with an individual who is to be released from prison within the next week or so due to a change in the law that mitigated his sentence from life.

The 43-year-old man candidly discussed his decision to kill a fellow 17-year-old over a girl 26 years ago and the consequences of that action. Crook County Commissioner Fred Devish later described the conversation.

"It was a heart wrenching story," he said. "We went there thinking it was going to be another story about drunk driving, but when he started to talk, everyone shut up and paid attention... It was dynamite."

While Life Flight had agreed to take part in the mock automobile crash in the afternoon, they were called for another situation that took precedence; however, ground crews from Moorcroft and Sundance were on hand to simulate rescue efforts.

As emergency services prepared for their part, Sundance paramedic Kenny Weaver expressed his hope that the message they were attempting to get across will have positive results and the young people will "try not to do dumb things."

Buffalo Police Chief Sean Bissett agreed with Weaver's comment, saying he hoped the kids would leave better understanding "the severity of some of their actions. This is real life and 15, 16, 17 [year-old youth] think they're invincible. I think this is a really good wake up call to stick in their mind when they go to make that important decision".

The chief later spoke about the more intensive aspects of the event and how it followed on from the Freshman Impact Program.

"We kind of took what they did and tried to build it toward our communities instead of just the general program, focusing more on what we're seeing in our communities."

He talked about the interactive opportunities offered, with pedal cars and distortion goggles simulating driving inebriated, "to let them see, but not in the classroom setting where it's just boring school; it's getting them involved and letting them have firsthand experience."

"Being in the room with these kids and getting to watch some of the things that impacted them," Bryant smiled, "You could just see [in] their faces – something hit home, the light bulb kind of came on for them."

The group plan to conduct this program every year, but the locale of the event may change. According to the chief, "We might combine it back to Newcastle because, next year, we're only going to do the freshmen. So we won't have quite as large a group."

He assured people, though, "One way or another, we're going to continue to do it."

Bryant said the suicide awareness presentation was very impactful for the Moorcroft community, "Just because we've had so many in the last couple years... because the kids have had to deal with it."

He said, too, that another volunteer noticed a number of students crying as they watched the simulated crash, commenting, "That tells me, that had an impact."

"That is part of the joy I've had," said the chief. "Getting to see the impact we're having on the kids and knowing we've made a difference somewhere."

Speaking on the more targeted efforts of the new program, Bryant said, "I'm very excited to be part of it, especially as we kind of morph it into our own program. To be able to come to the schools and say 'Hey, what problems are you seeing that, maybe, we can address next year?'"

The first responders volunteer their time individually or by agency to participate in these programs.