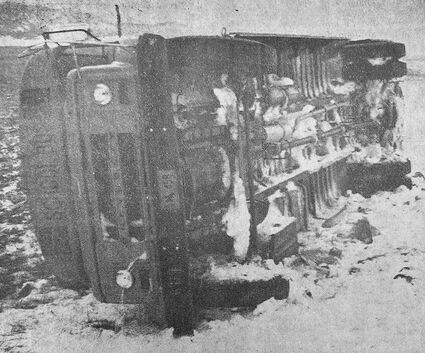 50 Years Ago, May 4, 1972: This big, fat, yellow school bus looks dead but it isn't. It's only stunned after flipping off Highway 585 south of Sundance Monday afternoon during a spring blizzard. Driver Marshall (Bink) Nussbaum was northbound to Sundance about 3 p.m. to pick up passengers when the bus went out of control because of heavy slush and high winds. It slid off the right side of the road, coming to rest gently on its side. The bus received practically no damage. Nussbaum and a passenger, Parker Richard, were not injured.

Mining locations in large numbers are being made in the new Moorcroft gold field and a wonderful feeling of optimism exists that a real gold field of large extent has been located. Many outside parties have been attracted to the scene and after investigation appear to share the enthusiasm of the early locators.

The presence of a lone pheasant roosting on the coping of the State Bank building Monday excited some curiosity among bystanders. Several opined that it was an omen of dire portent ranging in disaster from a dry summer to another hard winter. No doubt it was...