Marabel F. Gates, 97, passed away peacefully in living faith on April 1, 2022. She was born July 27, 1924, in Sheridan, Wyoming. She was a lifelong member of the Old Apostolic Lutheran Church.

She was born to Fred R. and Frances S. (Roberts) Blakeman, the eldest of 14 children. The family was raised in the Crook County area of Wyoming.

She graduated from Moorcroft High School in 1941 and went to Black Hills State Teachers College in Spearfish for a year. She received her certificate to teach school for three years, which she did in Wyoming at country schools.

The family lived in Cheyenne for ten years where Marabel worked for the State of Wyoming in the Capital Building. From there they moved to Casper, where Leo died in 1985. They enjoyed many hunting and fishing trips together.

Marabel moved to Sheridan in 1989. She clerked for Weight Watchers for over 35 years and also volunteered at the hospital gift shop.

She enjoyed sewing and quilting and was an avid walker. She was always interested in people and her community. She never met a stranger and befriended everyone she met. She was loved by friends of all ages and will be greatly missed.

Marabel's faith and her family and Christian friends were of paramount importance to her.

She was preceded in death by her husband; her parents; seven brothers; three sisters; as well as three of her children, Francie Lobstein, Robert Gates and Maralee Koch Smith; two sons-in-law, Glynn Lobstein and Michael Homola; and two grandchildren. Her brothers preceding her in death, all Blakemans, were James, Robert, Richard, Kenneth, Benjamin, Theodore and Calvin. Her sisters were, Lois Morgan, and two baby sisters, Elaine and Lillian. 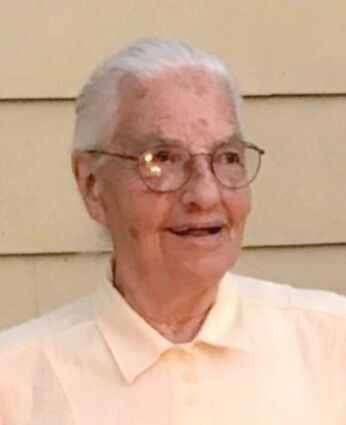 Funeral was held Wednesday, April 6 at The Old Apostolic Lutheran Church in Sheridan. Burial was in Moorcroft, Wyoming cemetery.

In lieu of flowers, contributions may be made to the Old Apostolic Lutheran Church of Sheridan, 111 Metz Road, Sheridan, WY, or The Hub (Sheridan Senior Center) 211 Smith Street, Sheridan, WY, 82801.

Online condolences may be made to http://www.sheridanfuneral.com.

Arrangements are under the care of Sheridan Funeral Home.