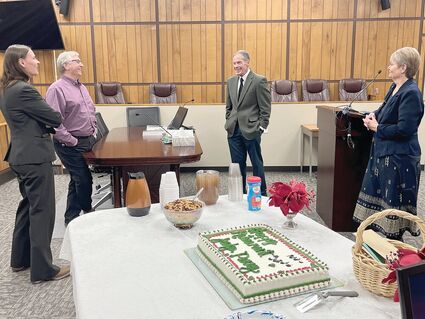 Colleagues and friends came together on Thursday to pay their respects to Judge John R. Perry, who is retiring at the end of the year. Cake and conversation punctuated the usually solemn surrounds of the county courtroom.

Above, the judge (center) shares stories of his time serving the district as guests begin to arrive for his retirement party.

Judge Perry has served as District Court Judge for the Sixth Judicial District, which covers Campbell, Crook and Weston counties, since 2000. He announced his retirement in August, with an effective date of January 3, 2022.