A tribute to warriors 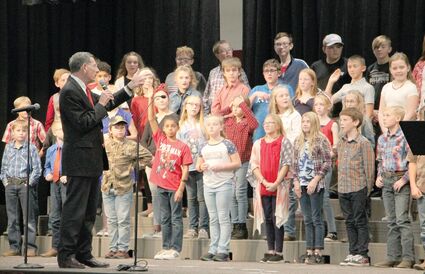 U.S. Senator John Barrasso asks the choir about America and its armed forces during his address as the performance began.

U.S. Senator John Barrasso opened the Veterans Day musical program at Sundance Elementary School last week with a speech about the importance of those who serve and Wyoming's contributions to the defense of America.

Barrasso brought "challenge coins" with him for every veteran present and spoke to the fact that all Wyoming's veterans are also cowboys, which means they keep on going and never complain. He told the audience that his father fought during World War II and was involved in the Battle of the Bulge.

Barrasso's father told him that freedom was never more than a generation from being...