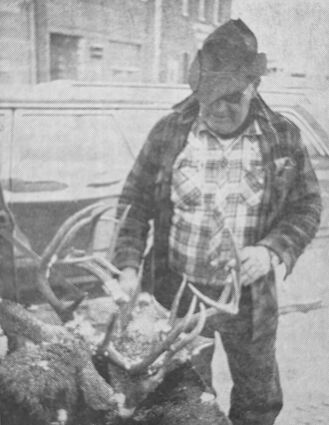 50 Years Ago, Nov. 18, 1971 - Jim Ross studies the heads of two buck deer whose racks are locked together for eternity. The bucks were fighting when Ross and his wife shot them last week in the Houston Creek area. Ross said the antlers were so entwined that the heads had to be severed in order to move the deer.

Fausto Musso, a coal miner, was killed and several other miners and county and federal officers were reported wounded in a raid on alleged moonshiners at Cambria, Sunday night, according to word received here Tuesday. A lively gun battle is said to have taken place at Cambria between officers and alleged moonshiners when the sheriff's posse and federal agents swooped down on the camp about midnight in quest of law breakers. Officers are said to have received a tip on alleged moonshining operations at Cambria two weeks ago when a car load of wine-making grapes wer...