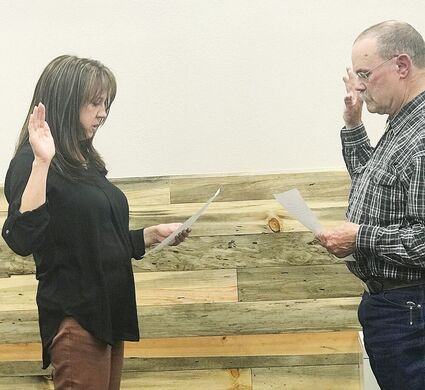 Tammy Jundt is sworn in as Crook County Treasurer by Commissioner Kelly Dennis.

After holding down the fort at the Crook County Treasurer's Office since Mary Kuhl was suspended on suspicion of malfeasance, Tammy Jundt is no longer the acting treasurer.

Instead, with the blessing of the Crook County Republican Party (GOP) and the Crook County Commissioners, she will officially serve as the county's treasurer until the next elections in 2022.

The party's central committee was tasked with selecting three candidates to fill the seat left open by Mary Kuhl upon her resignation as county treasurer, which was received by the commission on October 8 and became effective on Oc...