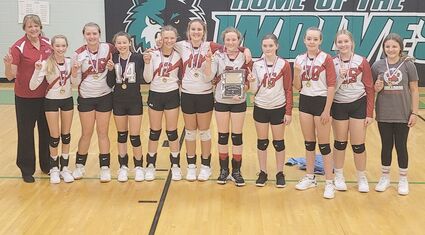 The Sundance eighth grade volleyball team finishes a successful volleyball season with a win in two sets against Upton and Wright at the District Tournament Oct. 15. Scores for the matches were: 25-15, 25-21 vs. Upton in the semifinals and 25-19, 25-16 vs. Wright in the Championship.

With a season record of 18-3, winning the preseason quad, the Newcastle invitational against 3A and 4A schools and the midseason tournament against South Dakota Schools, the eighth-grade team was successful throughout the season. Always demonstrating the hearts of champions with a commitment to meeting team goa...