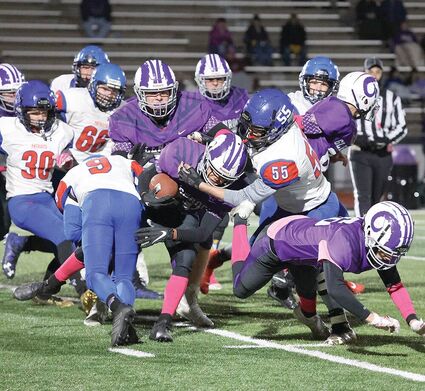 Ben Miller and Reece Barritt bring down the ball carrier.

The Upton-Sundance Patriots steamrolled the Glenrock Herders this past week, taking a 45-0 victory. The Patriots seemed to dominate both the offensive and defensive ends in the first half as Patriot Quarterback Keaton Mills found Luca Brooks twice in the first quarter for a 35- and 28-yard reception pass into the endzone.

Mills then made a 42-yard run in the second quarter to put the Patriots up 19-0 at the end of the first half of play.

The total field domination continued into the second half of play as the Patriots stunned the Herder defense, scoring three more times throughout the th...