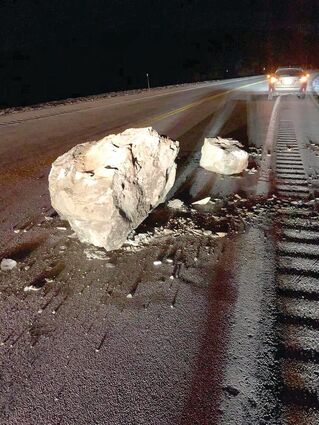 The rock fell from a known trouble spot near Carlile.

nto the road near Carlile last week – a casualty, it seems, of the sudden influx of moisture caused by the snowstorm the day before.

Reports of the rock's infiltration came in just after 8 p.m. on Thursday, October 14.

"The day after the storm, when everything was starting to melt," says Brad Marchant, WYDOT Area Maintenance Supervisor.

The fall was not entirely unexpected, he explains, as, "It's a natural trouble spot. We've had a lot of rocks come down there over the years."

"It's the kind of slope that's about one to one and the rock is up high and below is just soils," he says.