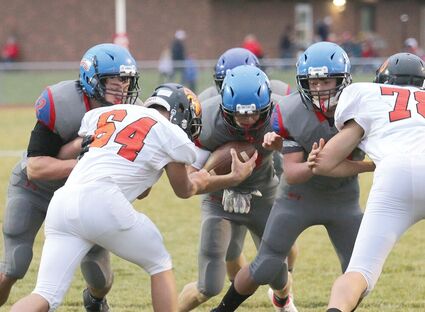 Keaton Mills pushes through the line on the keeper.

A solid Patriot defense helped the team in securing a homecoming victory over Burns Broncs this past weekend. Opening the game in true Patriot fashion, the home team was first on the scoreboard as the opening drive brought them down the field and quarterback Keaton Mills ran the ball in for the touchdown.

Levi Rudloff added an extra point and put the Patriots up 7-0 in the first quarter of play. A solid effort on the defensive end kept the Broncs out of scoring territory throughout the first half of the game while the Patriots continued to get excellent field position due to the ineffective punts by the Broncs.

The short punts by the Broncs kept the Patriots in command of the field, allowing them to work their way down the field on offense and at times pin the Broncs deep in their own endzone on defense.

The opening minutes of the second quarter seemed to mirror the first as the Patriots took control and made their way into the endzone with little haste. A roughing the kicker penalty on the Broncs gave the Patriots another opportunity for extra points and they decided to go for two.

Keaton Mills found Reece Barritt for a two-point conversion putting the Patriots up 15-0, while the Broncs continued to struggle on offense.

The Patriots continued to dominate the field throughout the third quarter, coming up with a sack on the Broncs quarterback in the opening minutes of play, forcing them into another short punt and allowing the Patriots to once again have excellent field position. Working their way down the field, the Patriots were unable to secure the necessary yardage and punted the ball away.

Burns took over for a short-lived run on offense as Patriot Reece Barritt intercepted the ball, returning it for a touchdown, unfortunately a holding call brought the ball back to the 22-yard line and the Patriot offense took over again in great field position.

A few short plays later and Keaton Mills found his way into the endzone for a second time, putting the Patriots up 21-0.

The Broncs offense finally found their way down the field throughout the fourth quarter, scoring on a 14-yard run and 11-yard reception, giving them 12 points for the game, but it was no match for the Patriots, who took the 21-12 homecoming victory.

The Upton Sundance Patriots will travel to Glenrock to face the 2-5 Herders on Friday. 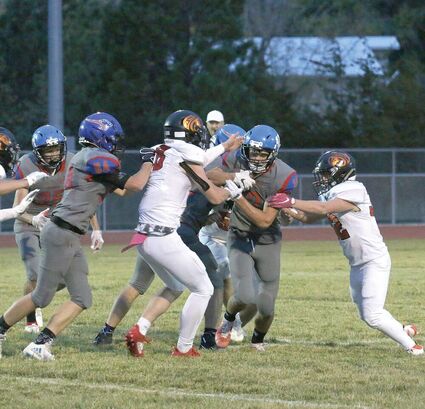 Levi Rudloff pushes around the end.