Wanda Alice Blakeman, 55, passed away October 1, 2021 at Crook County Hospital in Sundance, Wyoming. She was born November 22, 1965 in Rapid City, South Dakota, to Ted and Clara (Morganflash) Blakeman. She was living in Sundance at the time of her passing.

Wanda enjoyed spending time with family and friends, especially with her grandkids. She was an avid fisherman, often catching more fish than anyone she was with. She also enjoyed puzzling and crafting.

She worked several years at the Crook County Hospital and Long Term Care Center as a CNA as well as with Sundance EMS as an EMT. She had such a loving heart and cared deeply for all her friends and family, her door was always open, welcoming all. She will be loved and missed by all who knew her. 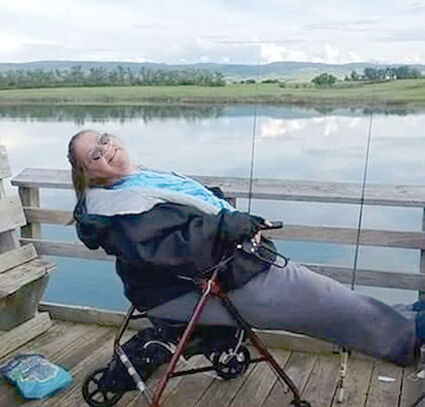 A viewing will be held at the Old Apostolic Lutheran Church at 2040 Vista Hills Place, Spearfish, SD, 57783, Wednesday, October 6, 2021, at 6:30 p.m. The funeral service will follow on Thursday, October 7, 2021 at 2 p.m. Following the service, the internment will be held at Rose Hill Cemetery in Spearfish. Funeral arrangements were entrusted to Fidler-Isburg Funeral Chapel Spearfish, SD.